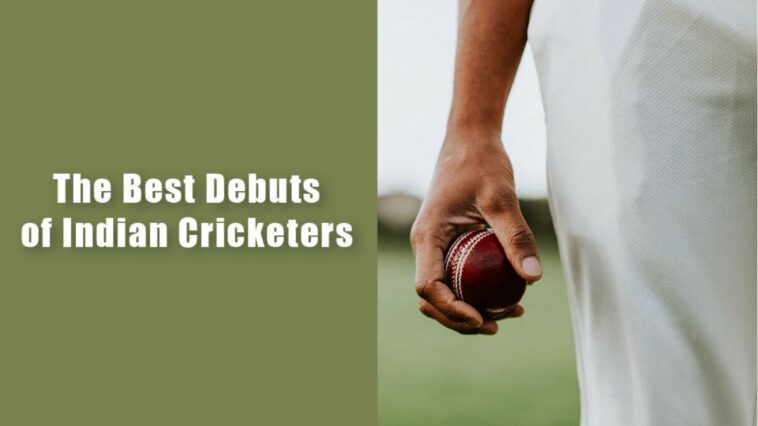 The Best Debuts of Indian Cricketers

As the old saying goes, ‘well begun is half done’. The adage emphasizes the importance of a good beginning of any endeavour or mission. This statement is especially applicable in the case of sports because the minute a player steps onto the field to play, the eyes of not just his teammates and coach, but of all the fans of the sport and pretty much everyone else are fixed upon him.

Cricket is without a doubt one of the most thrilling and action-packed sports to watch (and of course, play), and one of the most noticeable developments in today’s world as a result of the immense popularity of cricket is the rise of fantasy cricket. It’s just as much fun! All you need to do to start playing is download fantasy cricket app from Google Play Store or Apple Store.

In this blog, we would like to share with you some of the best debut performances of Indian cricketers over the years.

Mohammed Shami made his ODI debut in January of the year 2013 against the Pakistani side, where his pace battery was spot on target right from the very first ball that he bowled. Needless to say, Mohammad Shami was quick to impress both his team as well as fans with his ability to bowl at a speed of over 140 miles per hour consistently.

It was in November of the same year that he made his Test debut against the West Indies side. He picked up 9 wickets for 118 runs in Kolkata, an impressive feat in the first Test. If that’s not enough, Mohammad Shami also holds the record for the most number of wickets by an Indian fast bowler in a debut performance.

Known lovingly among his fans as ‘the Prince of Kolkata’, Sourav Ganguly made his ODI debut against the West Indies team in the year 1992. In his debut game, Sourav Ganguly scored 3 runs and was unfortunately dropped from the Indian team due to what was described as arrogance on his part.

However, after an outstanding performance at the Duleep Trophy, he was called to play for the Indian national team once again, this time for a tour of England in the year 1996. In this tournament, Ganguly made his Test debut in the second Test match of the series along with teammate Rahul Dravid. Subsequently, what happened turned out to be one of the most iconic partnerships in the history of cricket at Lord’s Cricket Ground, and this gave Ganguly a well-deserved place in the list of the best debuts by an Indian cricketer. Sourav Ganguly played his well-known cover drives against the English side and went on to score 131 runs in his debut innings. To this day, his score of 131 runs remains the highest score secured by any batsman in a debut match at Lord’s.

Ravichandran Ashwin is the premier spin bowler of the Indian team. His debut match was against the West Indies team in the year 2011. Finishing the first match in Delhi having taken 3/81 in the first innings and 6/47 in the second innings, Ashwin got his cricketing career off to a great start. The 9 wickets he picked up turned out to be the second-highest number of wickets that any Indian player picked up in his debut match.He also received the Man of the Match award and was only the third Indian cricketer to receive the award in a debut performance. Ravichandran Ashwin also scored his maiden Test century, having scored 103 runs from 118 balls, and this set him firmly as an all-rounder.

K. L. Rahul made his ODI debut during India’s tour of Zimbabwe in the year 2016. He was already well known for his performances in Indian domestic cricket tournaments as well as those in the Indian Premier League, but his unbeaten century, which he scored in his first match against the Zimbabwean side made him the first Indian cricketer to pull off the feat in a debut performance.

K. L. Rahul scored yet another century when he made his Test debut against the West Indies team, having scored 158 runs. This made him the first Indian cricketer to score a century in both his Test and ODI debut matches.

Renowned Indian leg-spin bowler Narendra Hirwani made his Test debut in the final Test match against West Indies in the year 1988. Hirwani completed the first innings with 8 for 61 runs, and one of his wickets included the wicket of Viv Richards who was clean bowled for him. In the next innings, Narendra Hirwani picked up yet another 8 wickets. He ended the match with a jaw-dropping 16 wickets for 136 runs, and all this in 33.5 overs! Hirwani’s Test debut figures remain a record to this day.

Mohammad Azharuddin is nothing short of an icon in Indian cricket. He made his debut for the Indian team against the English side during their tour of India in the year 1984. In the first match which was held in Kolkata, India had managed to score a measly 127 for 4 when Azhar came in for batting. In partnership with Ravi Shastri, Azhar added 241 to India’s tally and also managed to hit a century, scoring 110 runs in his debut match. Azhar’s second Test match played out in a similar fashion.

These are just a few of the spectacular displays of the playing prowess of Indian cricketers in their debut matches. These stories show how important a debut match is, not just for the Indian cricket team, but for any sportsperson or athlete. What’s more, a good debut performance boosts a player’s morale and creates a lasting positive impression on the team as well as on fans.