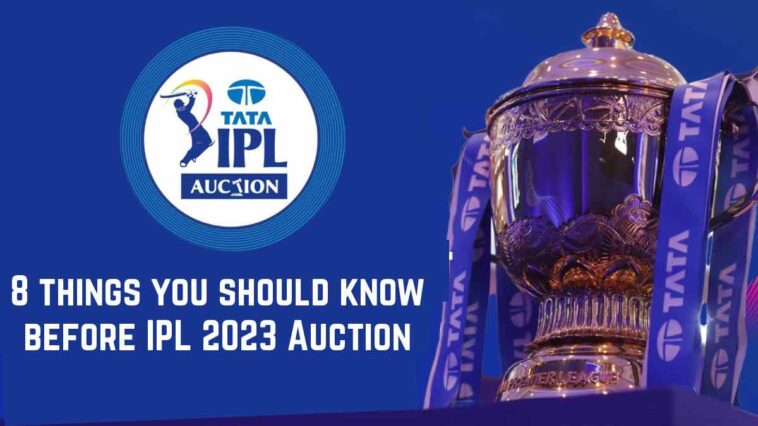 8 things you should know before IPL 2023 Auction

Players auction for the 16th season of the Indian Premier League (IPL 2023) is scheduled to take place on December 23 in Kochi. Cricket viewers are excited as they are heading closer to the IPL 2023.

Here is 8 thing you should know before the IPL Auction 2023:

The ten franchises have a total available purse of Rs 206.5 crore. The breakdown of the purse value of each franchise is listed below:

A total of 87 spots are available in eight franchise teams including 30 overseas slots. A total of 405 players; 273 Indian players and 132 overseas players are up for grabs. There are a total of 119 capped players, 282 uncapped and 4 players from the Associate teams.

Slots availability for each team are broken down below:

The maximum squad strength for each team is 25 players. However, every team must have a minimum of 18 players in their respective squads. Also, a team can have a maximum of 8 overseas players.

Also Check: Complete List of players in the IPL 2023 Auction

Also Check: When and where to watch IPL 2023 Auction Live

Being a mini-auction, IPL Auction 2023 will not have the Right to Match card.

What is a Right to Match Card?

Only the first 87 players will be up for bidding under the normal process. player No. 87 onwards till 405 will be processed under the Accelerated Bidding Process.

What is the accelerated process?

As the name suggests, the accelerated process is to quicken the whole auction process. After the first day of the auction, the franchises will be asked to nominate, from the remaining pool, the players they are interested in. Those players will go under the hammer on Sunday. This process could be repeated if any franchise wants to further nominate unpresented/unsold until then.

The silent tie-breaker has existed in the IPL auctions since 2010 but it has not been used until now.

What is the silent tie-breaker?

It comes into play when a franchise makes a “last bid” for a player wherein it would have exhausted its purse and that amount would be matched by another franchise. Both franchises would then need to submit a written bid stating an amount they would pay over the “last bid” they had made. That tie-break bid is the separate amount the franchise has to pay to the BCCI and is not deducted from their purse. There is no limit on the amount of the tie-break bid. If the silent bids are also equal, the process will be repeated.