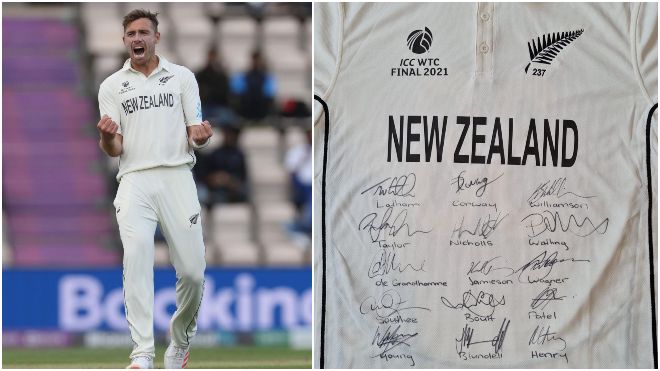 A Noble gesture from the Champion; Southee auctions his WTC final jersey for an 8-year-old’s cancer treatment

New Zealand pacer Tim Southee has decided to auction his ICC World Test Championship final jersey to collect and raise funds for the treatment of an eight-year-old girl- Hollie Beattie who is currently diagnosed with a rare form of cancer.

Southee announced his noble gesture on Instagram on Tuesday. He mentioned the shirt which will be going for the auction to raise funds and the money raised will be given to Beattie’s family. Hollie Beattie was diagnosed with a very strange and very regressive form of cancer in 2018.

On his Instagram post, he said, “Hey Guys, I am auctioning off one of my shirts from ICC World Test Championship Final to support @hopeforhollie. All proceeds from the auction will go to the Beattie’s family.”

The shirt has all the signatures of all the kiwi players who were part of the winning squad in the WTC final 2021. Southee heard about her condition through the campaigns as well as in the cricket community, so he decided to help her in every possible way.

Southee also mentioned in his post, “My family first learned about Hollie’s story a couple of years ago through the cricket community and I have always been struck by the Beattie family’s perseverance, strength and positive attitude. Since hearing that Hollie required more treatment I have been trying to find a way to support in some small way.”

He also added, “I am hopeful that this shirt can help contribute in some way to the Beattie family’s ongoing medical needs as Hollie continues to fight. As a parent, my heart goes out to them as they battle on. Any bid big or small is greatly appreciated!”

Southee was one of the major architects in building up the history of winning WTC for Blackcaps. He was the leading wicket-taker for his team in the cycle.