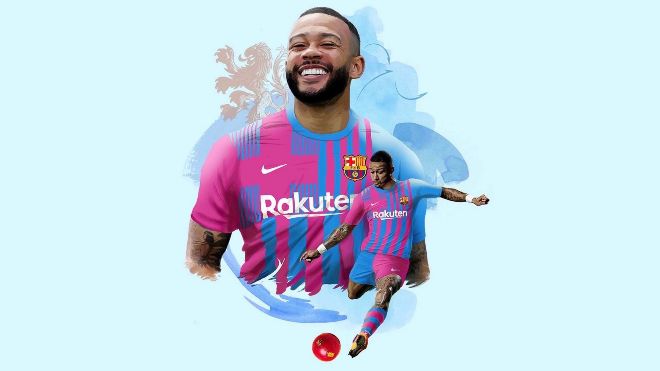 Barcelona announced the signing of Dutch player Memphis Depay on a free transfer from the French side, Olympique Lyonnais. The Spanish club signed Depay on a two-year deal, until the end of the 2022/23 season.

Depay becomes the third signing of the club with a free transfer after Sergio Aguero and Eric Gracia. Depay has long been a key target for Barcelona coach Ronald Koeman, who worked with the player when he was the coach of the Netherlands team.

The 27-year old sealed a 25 million euro deal with Barcelona, but the club still decided to end his contract with Lyon. Barcelona stated on the contract, “FC Barcelona and Memphis Depay have reached an agreement to join the Club, once his contract with Olympique de Lyon has ended. The player will sign a contract until the end of the 2022/23 season”.

Memphis Depay scored 20 goals in 38 games for Lyon last season and has five in his last four matches for the Netherlands.

He will likely compete with Sergio Aguero for the central striker position. Barcelona’s financial problem is still there which means they need to sell several players this summer. Philippe Coutinho, Samuel Umtiti, and Miralem Pjanic are among those who likely to leave Barca.

“It’s literally a dream come true for me to join the biggest club in the world, with the greatest fans,” said Memphis Depay.

Speaking from the Holland camp at Euro 2020, he said that “I’m so excited to play in front of a full stadium. Barça fans are obviously very special, the way they live the game, experience the game, and they love football so much.”

Memphis Depay started out at his hometown club VV Moordrecht. He was just nine when he joined Sparta Rotterdam, and from there moved on to PSV Eindhoven, which is where he made his Eredivisie debut. Coached by former Barça man Phillip Cocu, Depay soon became one of the biggest stars at Eindhoven.

His performances in the Dutch championship attracted attention abroad, and it was Manchester United who eventually secured him. At Old Trafford, and playing under Louis Van Gaal, he spent a season and a half before heading for Olympique Lyonnais in January 2017.

It was in France that he made his breakthrough. Highlights of his five and a half seasons included reaching the Champions League semi-finals and the Coupe de France Final in 2019/20, losing the latter on penalties to PSG.

He quickly became a regular for the Holland national team, where he has played under Ronald Koeman, and was in the side that finished third at the 2014 World Cup. He has already got on the scoresheet at the current Euro 2020.

His 22 goals made him the top goalscorer in the Dutch league in 2014/15, his highest-scoring season to date. But he came close to matching that tally in his final year in Lyon, scoring 20 times and finishing second in the charts. Where Depay truly excels is with assists – delivering 12 last season in France.