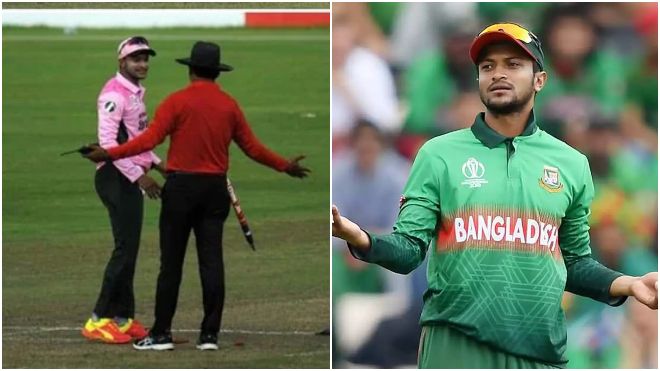 Bangladesh Cricket Board (BCB) have suspended former Bangladeshi skipper Shakib Al Hasan for 3 matches in the ongoing Dhaka Premier League for misbehaving and venting out the frustration on the umpire during a game on Friday. Along with the suspension, BCB have also fined him Taka 5 lakh which is equivalent to approx 5800 US dollars.

In a game on Friday, Shakib was leading his team Mohammedan Sporting Club against Abahani Limited. While he was bowling, he appealed for the dismissal but the umpire Imran Parvez refused his appeal. This made him frustrated and he uprooted and kicked the stumps out and started to argue with the umpire.

An over later, he ripped all the three stumps and threw them on the ground after umpire Mahfuzur Rahman called for the covers as it started to rain. This incident went viral on social media and many fans and supporters criticized his behaviour on the field where he was arguing and lashing out with the umpire.

Kazi Imam Ahmed, the chairman of the cricket committee of Dhaka Metropolis said, “The match referee’s report said that he committed two offences. He kicked the stumps and threw down the stumps. For this, Shakib Al Hasan has been sanctioned for three matches and fined Taka 5 lakh.”

He also gave instructions of forming a committee to find out the source of frustration and said in a statement, “The board president is very much concerned about this outburst, and wanted to know the root cause: why did it happen? He has asked us to do an investigation before the board meeting this week.”

“A committee has been formed including myself, [BCB directors] Jalal Yunus, Naimur Rahman, Sheikh Sohel and Raqibul Hasan, the chief match referee and BCB CEO Nizamuddin Chowdhury. We will hear from all the managers and captains of all the clubs, about any objection, incident, or [contentious] decision during this Dhaka Premier League,” he said.