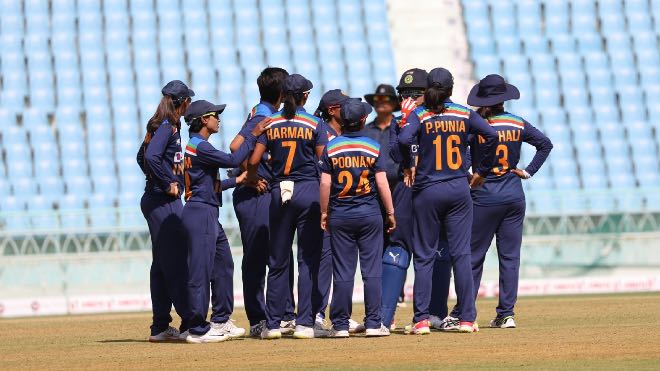 On Saturday, the Board of Control for Cricket in India (BCCI) announced the 21-member India Women’s squad for the England tour next month which includes one-off Test, three T20Is and three ODIs. The announcement comes a day after the BCCI reappointed Ramesh Powar as the head coach of the Women’s Cricket team.

Indian opener, Shafali Verma got her maiden for ODI and Test. Shikha Pandey and Taniya Bhatia also returned to the side, having missed out for the home series against South Africa, but Rajeshwari Gayakwad was left out of the squad as she continues her rehabilitation from a knee injury. Indrani Roy was another uncapped batter being awarded her first international call-up.

Sushma Verma, Sweta Verma, and Nuzhat Parween, the three wicketkeepers part of the limited-overs squads for the South Africa series, were left out of the squad, while Sneh Rana, who made the last of 12 international appearances in 2016, earned a return to the international set-up, being included in the squads for all three formats.

England will host India for a one-off Test starting 16 June, which will be followed by three ODIs and as many T20Is in a tour that goes on till 15 July.