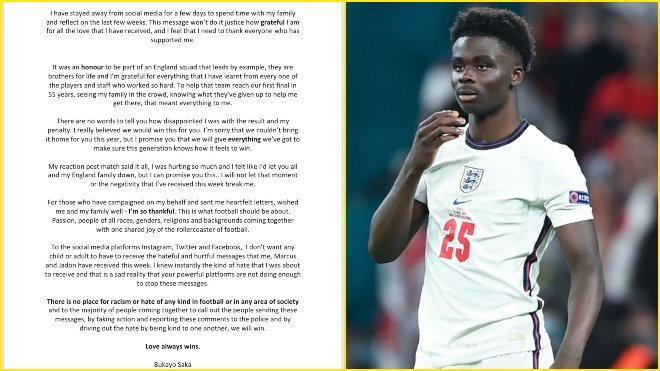 Bukayo Saka will forever have to live with the regret of not being able to convert the penalty for England in the UEFA Euro 2020 final. It is a moment of extreme regret and pain for a kid of just 19 years old and will haunt him for the rest of his career.

It has to be questioned that why did England manager Gareth Southgate place the responsibility of the biggest kick for England on the shoulders of a youngster? More so when veteran players like Jack Grealish were on the pitch?

England failed to convert three consecutive penalties after Marcus Rashford hit the post and Jadon Sancho and Bukayo Saka had their shots saved by Gianluigi Donnarumma.

However, the amount of hate and racism these three players had to face after the match is ridiculous and disgusting, to say the least. Social media pages were filled with hate comments and targeted with racist remarks.

Bukayo Saka has now been able to open up and has expressed his views on the whole matter in an open letter. He posted it on Twitter and talks about what he had to face and how love always wins.

“I knew instantly the kind of hate that I was about to receive, and that is a sad reality that your powerful platforms are not doing enough to stop these messages,” Bukayo Saka said.

“There is no place for racism or hate of any kind in football or in any area of society and to the majority of people coming together to call out the people sending these messages, by taking action and reporting these comments to the police and by driving out the hate by being kind to one another, we will win. Love always wins,” he added.