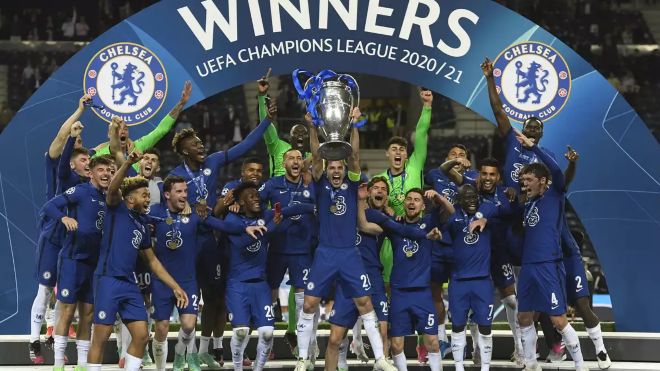 Chelsea are DESERVED Champions of Europe; Here's how they defied all odds to lift the trophy

‘Mount with the through ball and Kai Havertz is in here. Ederson has come off his line. Havertz has put Chelsea ahead in the Champions League final!’ This was the moment that crowned Chelsea as Champions of Europe 2021.

It’s been a roller coaster ride for the London giant’s this season and they fully deserve to lift the trophy once again. A long wait of nine years has finally ended after the fairytale night at Munich back in 2012.

Chelsea legend and manager Frank Lampard was sacked by the club after a string of poor performances. They found themselves in a precarious position and were ninth in the Premier League table. Furthermore, they had been drawn against Atletico Madrid in the round of sixteen.

In comes German mastermind Thomas Tuchel. A lot of doubt and concern as many view this as a short-term solution. How wrong have they been proven? Tuchel has forever embedded his name in Chelsea history books.

It’s not just the fact that Thomas Tuchel has overperformed in every sense, it’s the way he has done it. Nobody gave Chelsea a chance against Atletico Madrid, they were underdogs against Real Madrid, and then again with Manchester City, it was the same case.

But through all doubts, through all difficulties, this young Chelsea side has shown what it takes. They’ve shown that they do possess the quality to compete with the best clubs in the world. And for that reason, they are deserved winners of the 2021 UEFA Champions League.

The Test of the Knockout Stages

The Atletico Madrid match was the first display of what this Chelsea side can do. Diego Simeone’s men who eventually went on to be La Liga toppers were no easy opposition. But Chelsea completely dominated them to get into the quarterfinals. The Porto match was probably the only game where Chelsea had the upper hand.

But make no mistake, this was a Porto side that had eliminated Juventus in the previous round. Yet once again Chelsea hardly let them in with a sniff and went through to the final four.

13 times Champions. The Kings of Europe. Zinedine Zidane’s untouchables. The Spanish media had already declared Madrid as finalists before the start of the game. And how they were forced to eat humble pie. The Blues utterly destroyed Real Madrid across the two legs and knocked them off their high perch.

A Grand Night in Porto

And in all honesty, the scoreline should’ve been higher if only Chelsea could’ve converted their opportunities. But all that didn’t matter because they were en route to the grandest stage. They were through to the biggest footballing event. They were in the UEFA Champions League final.

Thomas Tuchel’s men had already defeated Pep’s boys in two prior matches so the equation was evenly poised. But it remained to be seen who performed on the big stage. And while one team grasped the chance with both hands, the other looked a shadow of their original self. Chelsea had an extremely tough run leading to their victory.

They faced the champions of Spain and England. Hence anybody who says they don’t deserve it is extremely wrong. For this Chelsea side was doubted at every step. Countless critics commented on their frailties. In the end, it’s Chelsea who can once again chant – ‘Champions of Europe, you’ll never sing that!’