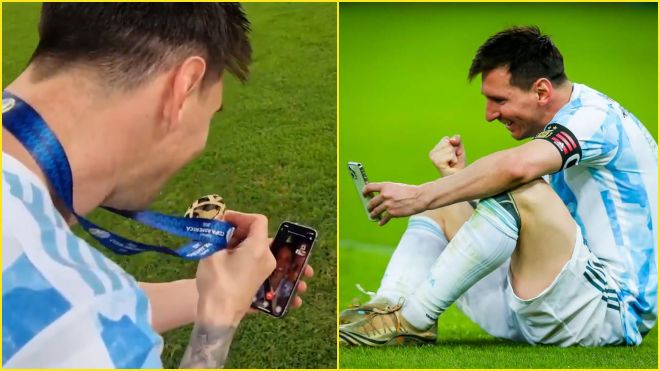 Lionel Messi’s long wait to lay his hands on an international trophy has finally ended. Argentina defeated Brazil 1-0 in the final of the Copa America 2021. The little magician has at long last succeeded in adding the final feather in a long list of achievements and accolades. However, this one will certainly seem the sweetest to him.

It’s well known that Lionel Messi is a family man and loves to spend time with his wife and kids. Thereby it was no shock that as soon as the match ended, he wanted to share this special moment with his loved ones.

In a video that is doing the rounds, Lionel Messi is seen video calling his wife immediately after the celebrations with his team ended as well as the post-match formalities. Messi can be seen showing his glittering trophy to his wife.

Messi has an international trophy at last

Due to Covid 19 regulations and restrictions, Lionel Messi’s wife Antonela Roccuzzo and his three sons could not come to Brazil. Roccuzzo too shared a video showing her and the kids celebrating the win in Barcelona.

Angel Di Maria scored the solitary goal of the game as Argentina triumphed over Brazil. This victory marks the first national victory for Sergio Aguero and Angel Di Maria as well. The Argentines have lifted the Copa America for the first time since 1993.