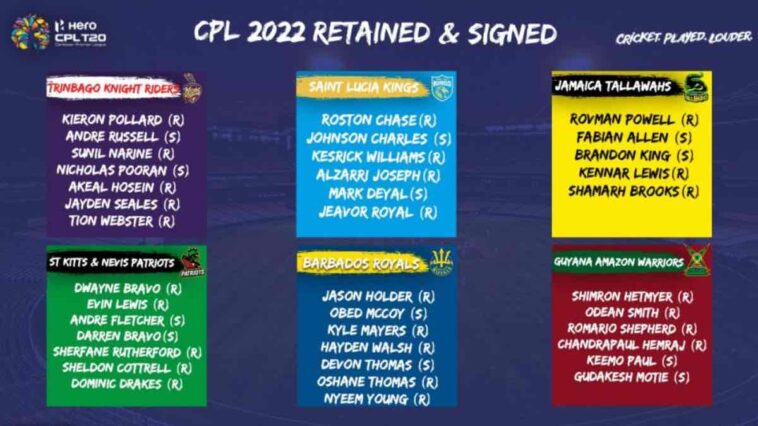 The 2022 Caribbean Premier League (CPL 2022) gets underway on 30 August and the six teams have confirmed their pre-draft retentions and signings of local players for this season’s event. The players are expected to arrive in the Caribbean by 23 August.

There were two pre-draft windows for the 2022 season. In the first window, each team could retain up to five Caribbean players with a maximum of two from the top five salary spots.

In the second window, teams were then given an opportunity to sign two more local players. These could be new signings from those who were not retained by other teams or players who appeared for that team in the previous season.

The Jamaica Tallawahs have retained three players from the squad in 2021, their captain Rovman Powell and their two leading run scorers from last season, Kennar Lewis and Shamarh Brooks.

The Tallawahs have signed two new players with Jamaicans Brandon King and Fabian Allen joining the team for the 2022 season. King was with the Guyana Amazon Warriors last year while Allen was on the championship winning St Kitts & Nevis Patriots side.

The 2021 runners-up, the Saint Lucia Kings, have retained last year’s Man of the Tournament, Roston Chase, along with Kesrick Williams, Jeavor Royal and Alzarri Joseph.

The signings for the Kings are local boy Johnson Charles who joins them from the Barbados Royals and Mark Deyal who re-signs having been with the Kings in 2021.

The Barbados Royals have retained their 2021 captain, Jason Holder, along with Kyle Mayers, Hayden Walsh, Oshane Thomas and Nyeem Young.

The Royals’ signings are Devon Thomas who joins them from the Patriots and Obed McCoy who was with the Kings in 2021.

The Guyana Amazon Warriors have retained Shimron Hetmyer, Odean Smith, Romario Shepherd and Chandrapaul Hemraj. Their signings see Keemo Paul rejoin his home franchise after a spell with the Kings in 2021, and Gudakesh Motie who was with the franchise last season.