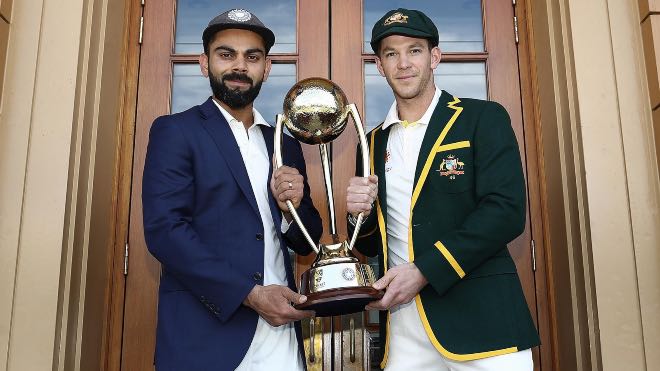 Cricket Australia announces schedule for India tour, Down Under

On Wednesday, Cricket Australia released the schedule for the upcoming India tour, Down Under starting from November 27. India and Australia are scheduled to play three ODIs, three T20Is and four Test matches.

The full schedule, which begins with limited-overs matches in Sydney and Canberra before the Vodafone Test Series starts in Adelaide with a first-ever day-night Test between the countries, comes after the NSW government last week approved CA’s strict biosecurity plans that will allow the 32-player India squad and the Australian players returning from the Indian Premier League to train while serving their 14-day quarantine period.

Indian 32-men squad, along with Australian IPL contingent is expected to arrive on a chartered flight from Dubai on November 12 from Dubai after the IPL Final on November 10.

The Australian IPL contingent and India’s squad, which was named earlier this week, should clear quarantine on November 26 and will play the opening match of the Dettol ODI Series at the Sydney Cricket Ground the following day, November 27. Although the Australian Border Force still needs to approve the travel plans.

The SCG will also host the second ODI on November 29 before the series moves to Canberra’s Manuka Oval for the third ODI on December 2. All three ODIs will be day-night affairs.

The Canberra venue will then host the opening match of the Dettol T20I Series on December 4 before the two sides return to the SCG for two further T20Is, on December 6 and 8. All three T20Is will be played at night.

An Australia A squad will also play two matches against the Indians, with a three-day red-ball game at Drummoyne Oval on December 6-8, followed by a three-day, day-night match with the pink ball at the SCG from December 11-13.

While the red-ball tour match at Drummoyne Oval will coincide with the final two T20Is between Australia and India at the SCG, all players will be available for the pink-ball day-night warm-up, raising the prospect of a star-studded clash, with the SCG clash officially listed as Australia A v India.

The spotlight will then shift to Adelaide, with a maiden day-night Test between the countries to start the Vodafone Test Series at the Adelaide Oval from December 17.

The Boxing Day Test has been scheduled for the MCG starting from December 26. Sydney’s annual New Year’s Test will start slightly later than usual, on January 7.

Four-match series is scheduled to wind up at the Gabba, a fortress for Australia who have not lost at the venue since 1988, a streak that stretches 31 matches. The fourth Test will be played on January 15-19.