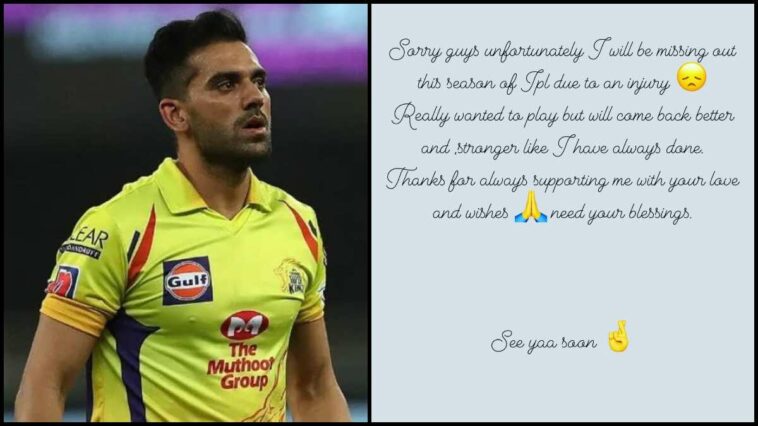 Deepak Chahar ruled out of IPL 2022 with a back injury; pens 'Emotional' note for fans

Deepak Chahar, the defending champion Chennai Super Kings’ star fast bowler, has been officially ruled out of the IPL 2022 season due to an injury setback at the National Cricket Academy. While recovering from a quadricep injury sustained during the third T20I against the West Indies in February, the 29-year-old sustained a back problem.

Last year, Chahar was an important component of CSK’s fourth championship success, taking 14 wickets in 15 games for an economy of 8.35. Chahar’s record for Super Kings in the same phase makes for fine reading: he has an economy rate of 7.61 with 42 wickets in 58 innings during the first six overs.

In IPL 2022 auction, CSK signed Chahar for Rs 14 crore, beating out three other franchises in the process.

In Chahar’s absence, CSK lost each of their first four games this season – a first for the franchise. CSK managed to win their fifth match, against Royal Challengers Bangalore. They were placed at the bottom of the standings, only Mumbai Indians, winless after five games, are below them on the table.

CSK CEO KS Viswanathan showed his disappointment over this development, saying that injuries are part and parcel of the game.

“We are disappointed because we don’t have one of our main bowlers but injuries are part and parcel of the game. We wish Deepak Chahar a very speedy recovery,” Chennai Super Kings CEO KS Viswanathan said.

After the news broke of Chahar being ruled out, he posted a message for his fans, saying that he really wanted to come back and play in IPL.

“Sorry guys unfortunately I will be missing out this season of IPL due to an injury. Really wanted to play but will come back better and stronger like I have always done. Thanks for always supporting me with your love and wishes. Need your blessings,” Chahar said in a Twitter post.

Despite not making the squad owing to injury, Deepak will be paid the full fee for the IPL 2022 season. This is because he has not pulled out for any other reason than injury and he is also a BCCI centrally contracted player. Players with BCCI contracts are covered by insurance and receive the full IPL fees regardless of injury.