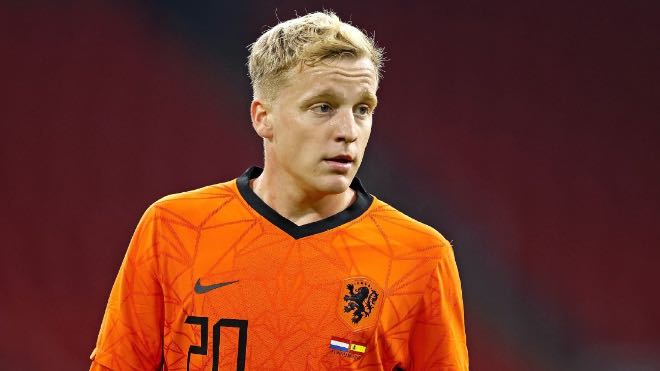 Manchester United midfielder Donny van de Beek will miss the Netherlands’ Euro 2020 campaign due to groin injury. The 24-year-old has been left disappointed after missing out on the European Championship this summer. He was in the final 26 men squad for Frank De Boer’s side. The manager won’t be calling any replacement for him.

The former Ajax player made his move to the Old Trafford club last summer. He endured a difficult campaign in Manchester with only 36 appearances in all competitions and just a single goal to his name. Most of those cameos have been off the bench. His high-priced transfer is widely questioned by pundits. Now, he faces another regret.

Donny van de Beek won’t be part of the Netherlands’s reversal of faith in qualifying for a major tournament after six years. The Dutch is paired with Ukraine, Austria and newcomers North Macedonia in Group C. This would have been in his first major competition for his country. The Netherlands will instead rely on their studded midfield to get over the line.

Today, Netherlands issued a statement declaring an injury to Donny that he has been struggling with recently. He will not recover during the Euros. As a result, he has been left with no choice but to force his exit from the squad.

The statement read, “Donny van de Beek has to let the European championship pass by. The Manchester United midfielder is struggling with an injury.”

“As a result, the 19-time international, who last played minutes in Orange in March during Gibraltar – Netherlands (0-7), is not available in time for the European Championship. National coach Frank de Boer does not call for a replacement for Van de Beek,” the statement further read.

“The Netherlands will play their first group match against Ukraine on Sunday, June 13. On Thursday, June 17, Austria will be the opponent, while the group stage will conclude with a meeting with North Macedonia on Monday, June 21. All duels take place in the Johan Cruyff Arena in Amsterdam,” the statement read.