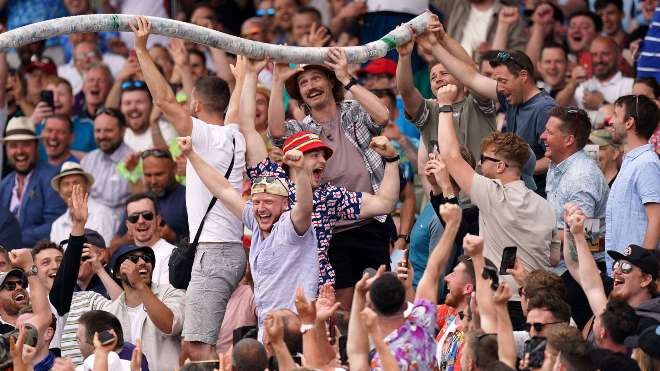 Fans are now allowed to watch cricket inside English stadiums after more than a year. In the first test match between England and New Zealand at Lord’s, 25% of the stadium’s capacity were allowed inside. The first test match ended in a draw.

However, in the second test match, 50% of the capacity have been allowed at Edgbaston Stadium. Over 18,000 fans attended the first two days of play and were thrilled to bits, to say the least. The English fans were vocal and pumped up.

But this excitement soon got out of hand as many drunk fans started to cause rampage to the stadium property. Moreover, some of the supporters even got into fights with other fans and didn’t allow the security personnel to function properly.

“Two of us have been injured already today,” said one steward, who was assigned in the infamous Eric Hollies stand.

“I almost broke my thumb with one of those beer snakes while my colleague had his shoulder done in ejecting a drunk member of the public,” he added.

This kind of behaviour is certainly not acceptable in the gentleman’s game. The fans should consider themselves lucky at being able to watch matches live once again instead of engaging in savage activities and rowdyism.