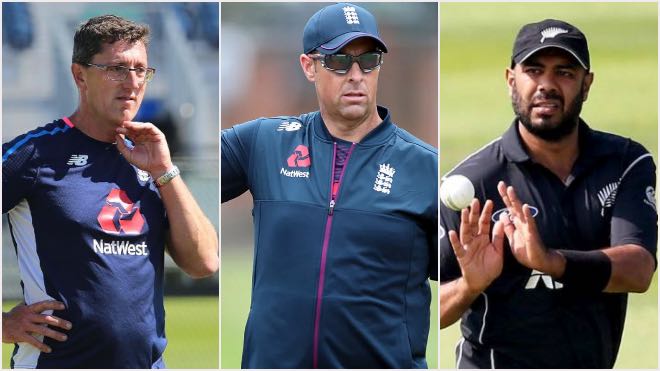 England and Wales Cricket Board (ECB) has appointed Marcus Trescothick, Jon Lewis and Jeetan Patel as batting, pace bowling and spin bowling coach of the England Men’s Cricket team. While Richard Dawson is appointed as the Pathway Coach.

Former England and Somerset batter Marcus Trescothick will step down from his role as Assistant Coach at Somerset CCC. Trescothick has experience working with the group and will take up the new role in the middle of March.

Current Young Lions Head Coach Jon Lewis has been promoted to the role of Elite Pace Bowling Coach. The former England seamer has held numerous roles within the pathway set up after a successful playing career primarily with Gloucestershire but also including stints at Surrey and Sussex.

Talking about the appointments Mo Bobat, ECB Performance Director said, “Over the last couple of years, we’ve been working to grow our pool of players that are ready to play for England. Achieving the type of depth that has enabled us to compete successfully across formats, both home and away. The Elite Coaches will play an important role in enhancing this depth further, helping us to sustain success over time. We want to be renowned and respected for the quality of our coaching.”

Dawson takes up the new role in mid-April, having previously been Head Coach at Gloucestershire CCC. ECB would like to thank Gloucestershire for their support in releasing Richard to take up the role.

Speaking about the changes, Mo Bobat added, “Jon has done a fantastic job leading our Young Lions programme and England U19 team over the last couple of years. His change of role has provided the opportunity to look at that position with fresh eyes. Given the strength of applicants that we’ve had through the recruitment process and the need for us to have an adaptable coaching workforce, I’m absolutely delighted that we’ve been able to appoint Richard Dawson as our Elite Pathway Coach.”