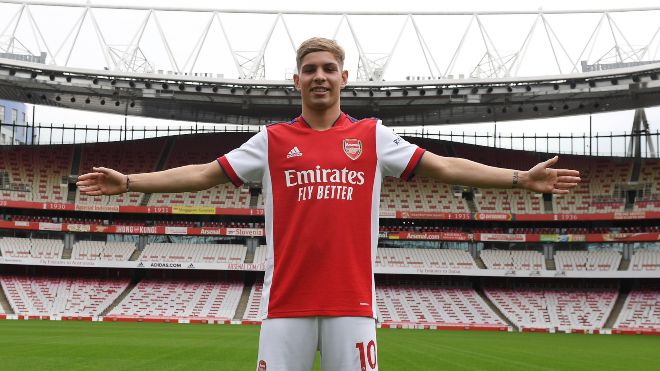 Arsenal youngster Emile Smith Rowe has signed a new contract with his boyhood club which will allow him to stay till 2026. Amidst interest from Aston Villa after an impressive debut season, he has committed his future to Arsenal.

The youngster has been handed the number 10 Jersey by Arsenal and he is delighted at the prospect of donning the jersey number of so many Arsenal legends. He is now eager to follow in the footsteps of his idols.

Speaking with Arsenal Emile Smith Rowe says it’s a privilege for him to get the number 10 jersey. He wants to emulate the performances of legends like Mesut Ozil and Dennis Bergkamp when he wears that shirt.

“Everyone knows that No 10 is a big shirt and it is definitely a big position as well. So I’m buzzing, to be honest, I can’t wait to get on the pitch,” said Smith Rowe.

“It’s really special – I can’t explain the feeling when I found out. I’ve not really got the words to explain it right now! But yeah, I’m really happy. The legends that have played here and have worn the shirt… it’s a bit too much right now but I’m sure I will calm down after a while!” he said.

“When I was younger I used to watch Dennis Bergkamp, and when I was going through the academy Mesut Ozil was here as well and getting the opportunity to train with him and play with him as well was unbelievable. I just want to keep working hard and hopefully, I can play like them and replicate what they’ve done,” he added.