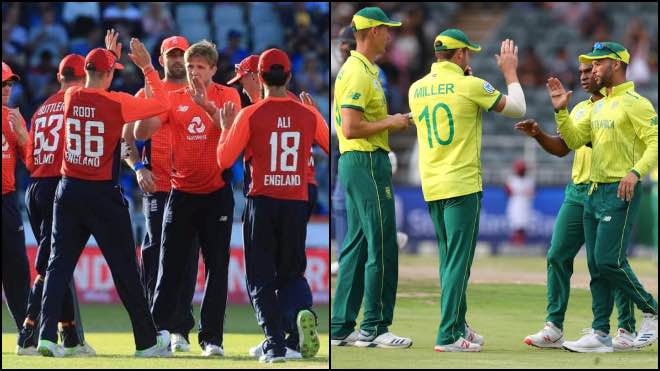 The England Tour of South Africa has been confirmed with three IT20s and three ODIs taking place behind closed doors in Cape Town and Paarl from next month.

Cricket South Africa (CSA) today received the go-ahead from the Ministry of Sports, Art and Culture to proceed with the limited-overs tour between the Proteas Men and ICC World Cup champions, England.

The tournament will consist of three KFC T20 International and three Betway One-Day International matches from 27 November to 09 December 2020.

The three IT20s start on Friday 27 November at Newlands, Cape Town. The second match of the series will be played at Boland Park, Paarl on Sunday 29 November. Newlands will host the third match on Tuesday 1 December.

The three-match ODI series, which are part of the ICC Cricket World Cup Super League, starts at Newlands on Friday 4 December. The second match will be played at Boland Park on Sunday 6 December, and the final game of the tour will take place on Wednesday 9 December at Newlands.

Eoin Morgan’s squad will depart from London on a chartered flight on Monday 16 November. The touring party will be based in Cape Town. Ahead of the IT20 series, the squad will train at Western Province Cricket Club. They will play three intra-squad practice matches – two T20s and one 50-over game – before the series starts.

Tom Harrison, ECB’s Chief Executive Officer, said, “We are looking forward to touring South Africa. I would like to personally thank Cricket South Africa for their efforts in ensuring this tour goes ahead and their diligent work to create an environment that is safe for our players and staff. They are working tirelessly to pull together a bio-secure plan in Cape Town and Paarl.”

“This is a wonderful boost for cricket,” commented CSA Acting Chief Executive Kugandrie Govender. “And, although all the matches will have to be played behind closed doors, I am sure that our Proteas fans will rally behind South Africa’s favourite team as they always do, but just on alternative digital and social media platforms,” he further added.

“The fact that England are the current World Cup champions will add tremendously to the two series and will give our own players every motivation to perform at their very best to challenge the reigning champions,” he said.