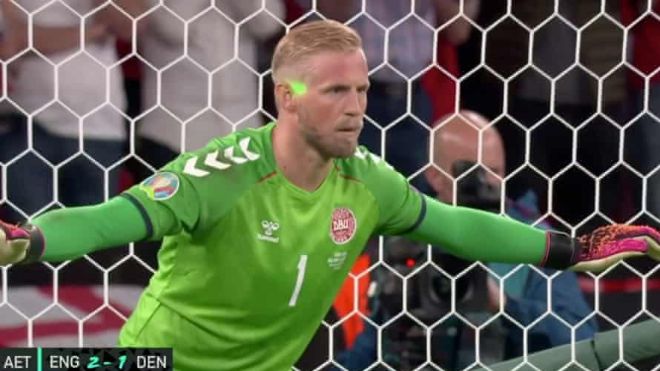 England defeated Denmark in the semifinals of the UEFA Euros on Wednesday night 2-1. The match stretched to extra time after Damsgaard’s stunning free-kick was cancelled out by an own goal. Harry Kane scored the winning penalty in extra time after Raheem Sterling was fouled.

However, in the run-up to the penalty kick, some England fans used unfair means to flash a green laser light towards Kasper Schmeichel‘s eyes. This has come to the notice of UEFA and they are planning to take action against England.

Furthermore, before the start of the game during the national anthems, England fans in a distasteful manner ‘booed’ the anthem of Denmark. This action has come under immense scrutiny with Prime Minister Boris Johnson issuing a statement as well.

“Uefa are looking into that, that’s a matter for them but it’s not something we would want to see. We don’t want fans to be booing teams. We want fans to be showing support and being respectful,” Boris Johnson’s official spokesman said.

The incident was caught by pundit Mark Pougatch who called the perpetrators ‘idiots’ on national television. Many fans took to social media to condemn such unruly behaviour as well.

“We can just hope that it didn’t put Kasper Schmeichel off because it’s stupid and he doesn’t deserve that,” Mark Pougatch said.

“That sort of thing, nobody wants to see,” he added.