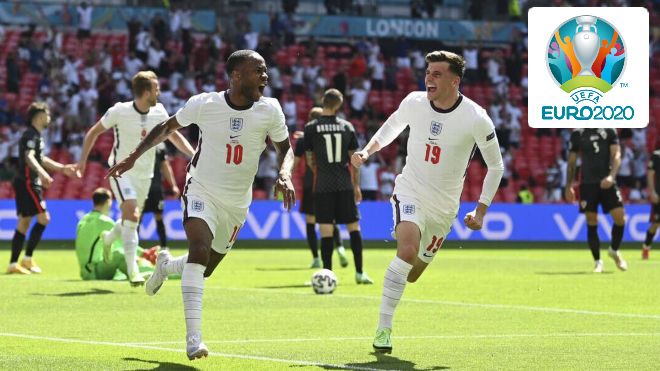 Euro 2020 Sterling’s elegant header helped England head towards the Round of 16; beats Czech Republic by 1-0

England beat the Czech Republic by 1-0 in the Group D encounter played at the Wembley Stadium in London of the Euro 2020. Raheem Sterling’s fine header in the early stage of the game helped the English to go one up. With this one, England had now qualified for the next phase of the tournament and that is Round of 16.

England as usual looking more formidable and had possession of the ball. Raheem Sterling scored the first goal for England in the 12th minute of the game with the help of a header. This was the second goal of Sterling in the tournament. Sterling’s clear shot with the head surpasses the Czech goalkeeper Tomas Vaclik. This goal was assisted by the cross from Jack Grealish.

But this was the only goal scored in the match. The Czechs need to make a counter-attack, despite the efforts of Tomas Holes and Tomas Soucek, they still were not able to equalize. England were still in their attacking mode, Jordan Henderson came in as a substitute and he marched towards the Czech defense and he kicked the ball towards the post, but soon it turned out to be offside. The match ended with a scoreline of 1-0 in the favour of England.

England has topped the Group D points table with 2 wins and a draw with three clean sheets. England is now ready to face either France, Germany, or Portugal at their home arena of Wembley Stadium in London. Sterling opted to focus on the positives of the game and said, “If you don’t concede goals you win football matches, you just need to score at the other end”.

He added, “People were disappointed in the Scotland game a few days ago but we didn’t concede. The most important thing was to win the group. It is tournament football and it will be difficult but we need to do what we are doing. I think there are positives from the game. We kept the ball better today. It gave us more attacking options. We got in the gaps really well, played some good football, and got the goal we needed.”