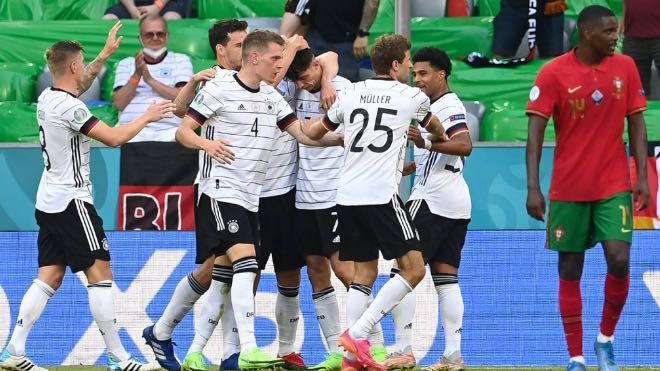 UEFA Euros 2020: Germany and Portugal play out a 6 Goal thriller in Munich

When the draw for UEFA Euros was done all eyes immediately went to group F. Germany, Portugal, France and Hungary. It was for certain a group of death. And it has certainly lived up to its hype. While on one hand France were held by a lively Hungary, Germany defeated Portugal by a remarkable 4-2.

The defending champions opened the scoring via a rapid counterattack by captain Cristiano Ronaldo. Toni Kroos’s corner was cleared away by Ronaldo as Portugal set off rapidly. Bernardo Silva races down the right flank before setting off Diego Jota who in turn puts it on a plate for Ronaldo. The Juventus star taps into an open net.

In a game with his own goals, Ruben Dias was the first unlucky one. Toni Kroos found Joshua Kimmich on the right who fired in a cross for Gosens who smashed in a volley. Ruben Dias had no other option but to make a challenge as Kai Havertz was waiting just behind him. Unfortunately, he ended up turning the ball into his own net.

Once again Portugal conceded own goal and this time they were trailing. Joshua Kimmich had the option to cut it back to Serge Gnabry and Guerreiro is forced to make the challenge and Rui Patricio has no chance. Germany went in with the lead at halftime.

Joachim Loew’s men started the second half in stunning fashion. Chelsea youngster made it three goals for Germany after a flowing move. Muller skids in the through ball for Gosens who fires the ball across the face of the goal. Kai Havertz is waiting and just guides the ball in.

If anyone on the pitch deserved a goal it was Germany’s Robin Gosens. Another overlapping run on the right from Kimmich who floats in a delivery. Havertz misses it but Gosens is there at the back post to turn it in. Germany were sailing through at this point.

Some loose defending from Germany let Portugal in with a sniff in the last quarter of the game. Portugal’s free-kick is swept straight into the box as Ronaldo goes unchallenged and passes the ball into Diego Jota who has to just poke it in. The Portuguese sensed a comeback and looked much fierier there onwards.

In all honesty, Portugal could definitely have got another goal back. Renato Sanches hit an absolute belter who ricocheted off the bar. Manuel Neuer was left absolutely still with that shot. Defender Pepe had a glorious opportunity from a corner kick but headed wide.