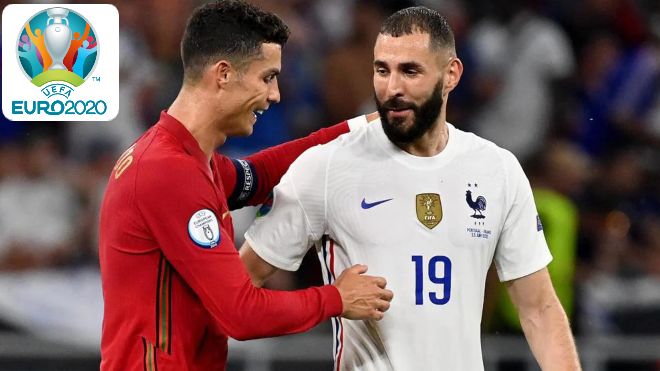 Euro 2020: Portugal and France play out a high octane draw as Ronaldo and Benzema score braces

Portugal and Germany settled for a point each as they played out an enthralling match at the Ferenc Puskas Arena in Budapest. A 2-2 draw in the group of death for the two heavyweights in the European Championship. Germany on the other hand too were limited to a 1-1 draw with Hungary.

Cristiano Ronaldo opened the scoring for Portugal with a penalty. Joao Mourinho’s floated cross into the penalty box caused the French defence to be all over the place. Captain Hugo Lloris came out to punch the ball out but instead manhandled Danilo. After several checks with the VAR, a penalty was awarded to Portugal and Cristiano Ronaldo in the usual fashion buried it.

However, Portugal’s lead was not for long as this time the tables turned on them. Nelson Semedo with the slightest of pushes on Kylian Mbappe and that’s enough for the Frenchman to roll on the ground. The slightest of contact is punishable nowadays. Karim Benzema this time for France and it’s 1-1. Moreover, defender Pepe is unhappy with Rui Patricio as he may have told the goalkeeper which way to jump.

The second half started with even more controversy as Karim Benzema’s goal which was initially given offside on the field was overturned by VAR. Joy and jubilation for the French meant sorrow for the Portuguese. Paul Pogba ball over the top found Karim Benzema who slotted it beautifully past Rui Patricio from a tight angle.

But we were still in for more drama in the game as Cristiano Ronaldo scored once again to bring Portugal roaring back. Jules Kounde with an unfortunate handball situation. Ronaldo once again buried it to take his tally up to 109 for his country.

Portuguese goalkeeper Rui Patricio pulled off some incredible saves to first deny Paul Pogba at full stretch and then Antoine Griezemann on the follow-up. There was some argument at the end whether France should’ve deserved a penalty after Bruno Fernandes’s challenge on Kingsley Coman.

“It was a fight and it wasn’t easy. We gave them the two goals from mistakes. We tried to win it. It means we’re top and that’s the best position,” said France manager Didier Deschamps.

“We were seeing the scoreline in the night’s other match as Hungary were beating Germany, and it was making things very complicated,” he added..

“It was an insane match that went in all directions. I am really satisfied. Football is pure magic, from one situation to another the emotions can change so quickly. The morale of the team can change too. Tonight was pleasing even though not everything was perfect. It was a match on the top level,” he said.