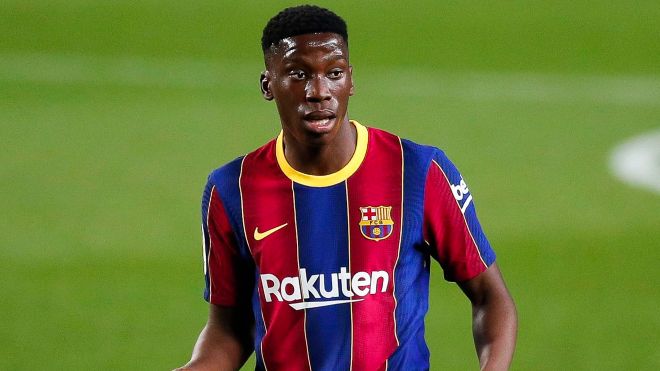 FC Barcelona are assertive that they can keep midfielder Ilaix Moriba at the club. Moriba has been linked with a move to the English Premier League. Clubs like Chelsea and Manchester United are interested in the midfielder.

Amidst all the transfer speculations, FC Barcelona B team coach Sergi Barjuan is confident that Ilaix Moriba will stay at the club. Barjuan has advised Ilaix Moriba to not leave Barcelona.

“I’ve been speaking with (Ilaix) and I told him that I will help with whatever I can, but above all, I advised him not to leave. I can’t get involved beyond that, it’s not for me to do that. I can just say that I hope he stays,” said Barjuan.

“It’s a new situation and a difficult one for him and for the club, but the important thing is that it doesn’t affect him. He needs to keep working hard so that if the situation is resolved, he’s in shape when the games arrive. He’s doing that, he’s managing a tough moment well,” he added.

On the other hand, Juan Laporta has talked about Antoine Griezmann. Laporta says that Griezmann is a Barcelona player at the moment but they are willing to listen to offers.

“Griezmann is a Barca player, he has a contract with the club until 2024 and unless circumstances change, we are counting on him. It’s a special market and you have to use your imagination, perhaps thinking in swap deals, but we value Antoine a lot. The club made a big investment in him and we are happy with him,” said Laporta.