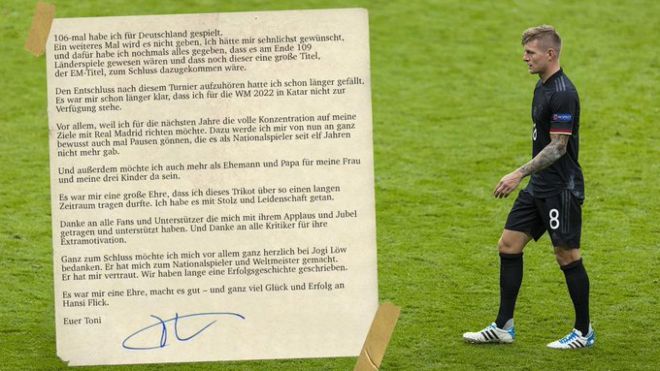 “I have played 106 times for Germany. There will not be another time. I had already decided to retire after this tournament for some time. It had been clear to me for a while that I will not be available for the World Cup 2022 in Qatar,” he said on Twitter.

He also said that his main priority would be his family and want to spend time with them. He also wants to focus on playing for Real Madrid.

“Mainly because I want to focus fully on my goals with Real Madrid for the next few years,” he added.

“In addition, from now on I will deliberately allow myself breaks that have not existed as a national player for eleven years. Moreover, as a husband and dad, I would also like to be there for my wife and my three children,” he further said.

In the end, he felt grateful and showed gratitude for playing for his country and said, “It was a great honour for me to be able to wear this jersey for such a long time. I did it with pride and passion.”

He announced his retirement after Germany’s lost against England in the Round of 16 by 2-0, which led to the Germans’ exit from the tournament.

Toni Kroos made his international debut in 2010 under Joachim Loew. The standout moment in his international career was winning the Football World Cup in 2014 in Brazil. He also represented Bayern Munich, Bayern Leverkusen, and he is currently representing Real Madrid.