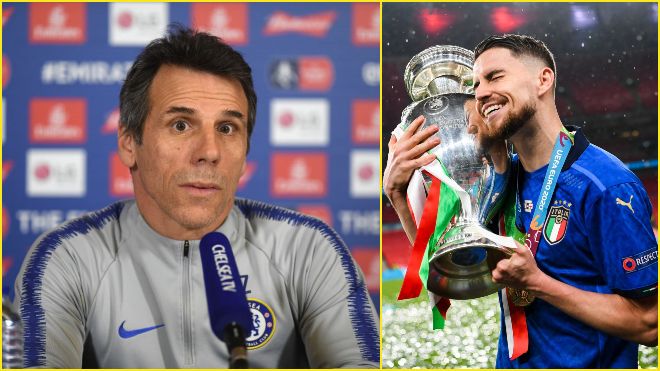 He deserves to win the Ballon d'Or: Gianfranco Zola on Jorginho's chances

Italian midfielder Jorginho has had quite the season. Firstly winning the UEFA Champions League with Chelsea and now lifting the UEFA Euro trophy with his nation; it’s safe to say that it has been a very successful season for him.

Jorginho was a crucial part of Thomas Tuchel’s Chelsea although he was ignored at large by Frank Lampard in the starting. And under Roberto Mancini in Italy, he was always going to be an integral member.

Now that he has managed to lift the two coveted titles, many experts and former players believe that Jorginho deserves to win the Ballon d’Or. The Ballon d’Or is the highest individual achievement for a footballer given by the French football magazine France Football.

Generally, the Ballon D’or is considered as a reward for personal exploits. However, if we go according to recent trends, it’s leaning towards players who have won the most trophies especially the Champions League.

“Now we are talking about a fantastic player like Messi who did extraordinary things for the first time with his national team – and this won’t go unnoticed. Should they give it to Jorginho? It would be deserved,” said former Chelsea player Gianfranco Zola.

“He gives concrete balance and pace to his teams. I was lucky to have him at Chelsea and I know what he does on the pitch,” he added.

It would be deserved because not only were his performances at a high level, but the teams he played for have been outstanding. This must be taken into account,” Zola added.