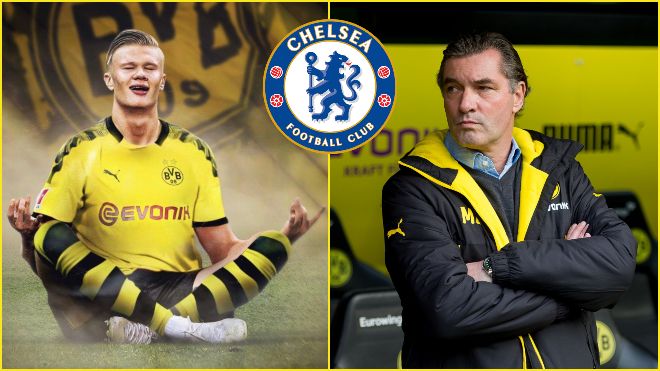 He is already in England: Borussia Dortmund fitness coach on Erling Haaland

Borussia Dortmund sensation Erling Haaland is linked with a move outside the German club this summer transfer window. A lot of big clubs like Manchester City, Real Madrid CF and FC Barcelona are all eyeing him.

However, Premier League club Chelsea at the moment seems to be winning the race for the Norwegian international. Thomas Tuchel’s Blues are in desperate need of a striker and have targeted Erling Haaland as their man.

But the task of getting Haaland won’t be easy. Borussia Dortmund have set a price of £150 million for Erling Haaland and won’t go a penny under that. Furthermore, they’ve already sold Jadon Sancho so will be less willing to part ways with Haaland.

Amidst all this drama, Borussia Dortmund fitness coach Michael Zorc has given a new twist to the story. Upon being asked why Erling Haaland was absent from the medical fitness test he jokingly replied that Haaland was already in England.

“Erling is already in England. Nothing has changed,” he added when asked over whether there could be a departure for the attacker. “We are firmly planning with Erling for the new season,” Zorc said.

According to recent reports from BILD, Chelsea want to guide Haaland to London with a €175m bid. When approached over Haaland, Raiola said ‘there’s nothing to say’. Haaland has also smiled when asked about his future. However, Borussia Dortmund are still stern in their stance to not sell Haaland.