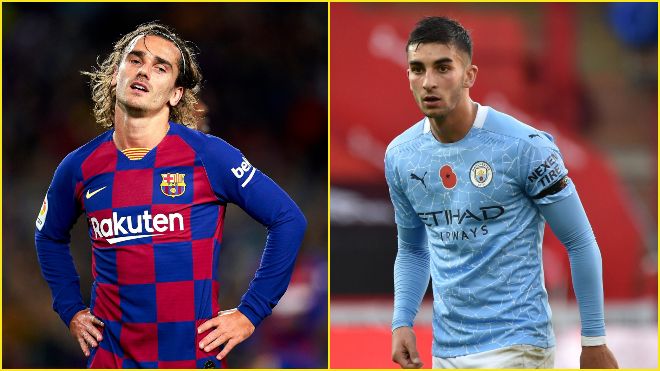 Barcelona forward Antoine Griezmann has been linked with the likes of Manchester City interested in the French international. There is growing speculation that Griezmann will be heading out to accommodate Lionel Messi.

Spanish youngster and Manchester City forward Ferran Torres had addressed Antoine Griezmann being linked with Manchester City. The Cityzens recently parted ways with veteran striker Sergio Aguero who has joined the Catalan side.

Now Pep Guardiola is looking to add more depth to his squad. Although Manchester City’s primary aim remains Harry Kane, they are looking at Antoine Griezmann as well who hasn’t clicked at FC Barcelona yet.

Griezmann has managed to score just 35 times on 99 occasions at FC Barcelona. This is far below the level he used to display when he was at Diego Simeone’s Atletico Madrid.

“He’s a great player,” said Ferran Torres to Spanish newspaper Marca when he was asked to comment on Antoine Griezmann’s future.

“Obviously, he’s at Barca; let’s see what can happen. I don’t know if [Pep] Guardiola has spoken to him. City are one of the best teams in the world, and they want to have the best players to win everything. If he comes, fine; if not, we’ll keep working,” he added.

Ferran Torres joined Manchester City from Valencia last summer transfer window for an approximate fee of £23 million. He has scored 13 goals in 36 appearances in his debut season.