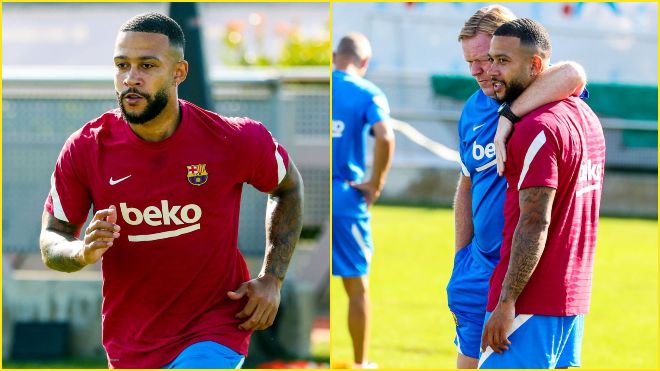 I am here to win titles: Memphis Depay is raring to get going at FC Barcelona

Netherlands international Memphis Depay has reached Barcelona to complete his signing with the Catalan club. He will be joining FC Barcelona as a free agent after his contract with French club Olympique Lyonnais came to an end.

Memphis Depay was recently involved with his national side in the UEFA Euro 2020. The Dutch hot eliminated by Ukraine in the round of sixteen. Speaking in his first interview for FC Barcelona, Depay said he was in Barcelona to win trophies.

Moreover, Memphis Depay also added that FC Barcelona’s attacking style suits him and he’s a ‘perfect fit’. Depay has already played under coach Ronald Koeman in the national team. After spending four and a half years at Lyon he has decided to move.

“It is a special day, I am very excited to go to the club and to the stadium. It is all very beautiful and it will be an incredible day,” Depay said.

“I hope to win many titles, which is why I have come to this great club. It is what the club represents, it has a very rich history. I’m looking forward to meeting everyone at the club,” he added.

“I just came from vacation and now it’s time to refocus. I want to start the season well and be totally focused here. I will try to adapt as quickly as possible,” he said.