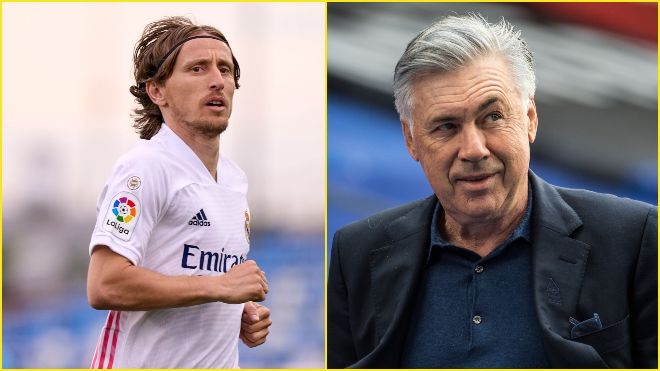 I can't wait to play under him: Luka Modric is thrilled to have Carlo Ancelotti at Real Madrid

Carlo Ancelotti is at the helm of Spanish club Real Madrid CF and will be their manager for next season. After long-standing coach Zinedine Zidane left the club after an unsuccessful and trophy-less season, the Los Blancos have decided to appoint Carlo Ancelotti.

One person who is extremely excited to have Carlo Ancelotti back in the Real Madrid camp is Luka Modric. The Croatian midfielder is excited at the prospect of being able to play under Ancelotti and cannot wait to get started.

Modric was part of Carlo Ancelotti’s Real Madrid which was successful in lifting the UEFA Champions League in the 2014 season. The La-Decima (10th UEFA champions league winning team) was managed by Ancelotti and has a special place for Luka Modric.

“I am very happy to see the coach again after a few years. It’s a tremendous joy. He is a great coach who had many successes in his first spell here and I hope he will also have them on his return,” Luka Modric said.

Luka Modric has been a great servant for Real Madrid and this will be his tenth season as a Real Madrid player. Even though he is currently 35, his fitness levels are top-notch and he featured for Croatia after a long and tiring season with Real Madrid.

Modric is back from his holiday after the UEFA Euros 2020 and is ready to get started. He says he feels as excited as the first day back in training.

“I’m still very excited, almost as much as I was on my first day. I’m happy to see my teammates again and I’m eager to work, prepare and to help the team to do well,” he added.

“The first sessions were good. I’m happy to be back. I’ve come back with a lot of enthusiasm and I want to work to do well this season,” he said.

Real Madrid’s midfield is definitely an ageing one with Toni Kroos, Luka Modric and Casemiro. All three of them are part of the Los Blancos’s history but it’s high time they start thinking about the future as well.

Federico Valverde is definitely one player who will be a star for them. Apart from him, there have been rumours of Real Madrid planning to raid Bayern Munich for German midfielder Leon Goretzka.