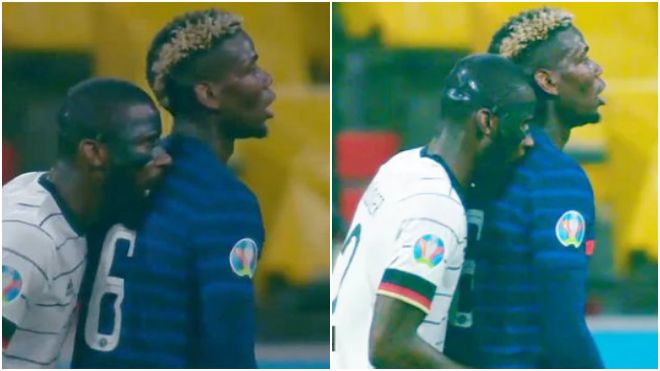 France got off to a flying start in their Europe Championship campaign with a 1-0 victory over Germany. The match was played out in Munich. A first-half own goal from Mats Hummels was the solitary goal of the game.

However, one interesting thing happened in the match which has shocked many. Chelsea defender Antonio Rudiger seems to have got a little closer to Pogba than the latter would’ve liked. Paul Pogba has said that Rudiger tried to ‘nibble’ on him during the match.

The two were involved in an altercation before the incident was shown on the big screen. Antonio Rudiger seemed to be leading into Paul Pogba’s back. The Frenchman had immediately complained to the referee.

“I’m not crying for cards, yellow, red cards because of such actions,” Pogba said.

“He nibbled, I think, a little bit on me. But we have known each other for a long time. I told the referee and he takes decisions and he took a decision. It’s over,” he added.

However, Paul Pogba also reiterated that they are close friends and know each other for a long time. This is the reason Paul Pogba doesn’t want Antonio Rudiger to be suspended or receive any punishment.

“It was a great match for us … and I didn’t want him to be suspended because of such a situation. It was towards the end of the match. We hugged each other and that’s it,” he said.