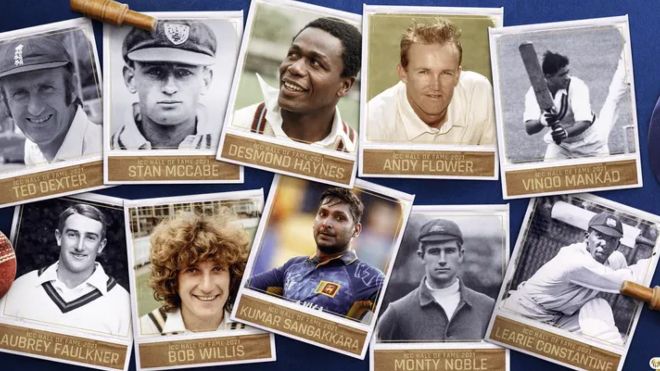 The International Cricket Council (ICC) today announced a special edition intake of 10 cricket icons into the ICC Hall of Fame to celebrate the prestigious history of Test cricket, and to coincide with the first-ever ICC World Test Championship Final. The 10 legends of the game to be inducted have all made a significant contribution to the history of Test cricket, and join an illustrious list of ICC Hall of Famers, taking the total number to 103 as a result of this intake.

The special inductions of the ICC Hall of Fame from the following five eras join the ranks of the world’s greatest players:

Early Cricket Era: Players whose greatest contributions to the game were before 1918

Aubrey Faulkner of South Africa played 25 Tests, scored 1,754 runs at 40.79, took 82 wickets at 26.58, and was one of the pioneers of the “googly” at the time. Faulkner was the only man to head both the MRF Tyres ICC Batting and Bowling rankings in Test cricket. He was one of the greatest all-rounders and later one of the best coaches. He was a part of the famous ‘googly quartet’ that so characterised South African cricket in the first decade of the 20th century and he peaked with the bat in the 1910-11 series in Australia when he made 732 runs in the five Tests.

Monty Noble of Australia played 42 Tests, scored 1,997 runs at 30.25, took 121 wickets at 25.00, and was one of the greatest Australian all-rounders. He is still the fastest from that country to achieve the 1,000 runs / 100 wicket Test double. He played 42 Tests, captaining his side in 15 of them, and he was a trailblazing captain, abandoning mammoth bowling spells to keep bowlers fresh. A true all-rounder, Noble was a banker and a qualified dentist outside of being a prolific cricketer of that time.

Inter-War Era: Players whose greatest contributions to the game were from 1918-1945

Sir Learie Constantine of West Indies played 18 Tests, scored 635 runs at 19.24, took 58 wickets at 30.10, and can be considered the first great West Indian all-rounder, playing with a flair and freedom that was decades ahead of his time. He was a champion not only amongst players but for his people too in their political and legal fight against racial discrimination. He was also the first black member of the House of Lords.

Stan McCabe of Australia played 39 Tests, scored 2,748 runs at 48.21, took 36 wickets at 42.86, and was a right-handed batsman of the highest class, he played three memorable innings and defied the “Bodyline tactics” that were predominant at the time within the England camp with 187 not out at Sydney. He further struck an unbeaten 189 at Johannesburg in 1935 and then 232 in less than four hours at Nottingham in the 1938 Ashes Test. He was touted as one of the greatest batsmen of the game by his captain Sir Don Bradman.

Post-War Era: Players whose greatest contributions to the game were from 1946-1970

Ted Dexter of England played 62 Tests, scored 4,502 runs at 47.89, took 66 wickets at 34.93, and was a superb batsman who combined a firm defence with the ability to destroy any bowling attack off both the front and back foot. His innings of 70 in the 1963 Lord’s Test lives long in the memory of all who saw it. He was an effective partnership breaker with his medium-fast seam bowling and later in life served as England’s Chairman of Selectors and played an influential role in developing what is today’s MRF Tyres ICC Player Rankings.

Vinoo Mankad of India played 44 Tests, scored 2,109 runs at 31.47, took 162 wickets at 32.32, and was an opening batsman and slow left-arm orthodox bowler, known as one of India’s greatest-ever all-rounders. His most famous feat was against England at Lord’s in 1952 when he scored 72 and 184 and bowled 97 overs in the match. He is one of only three cricketers to have batted in every position during his Test career. In later life, he also coached another legendary cricketer and fellow ICC Hall of Fame member from his country, Sunil Gavaskar in Mumbai, India.

ODI Era: Players whose greatest contributions to the game were from 1971-1995

Desmond Haynes of the West Indies played 116 Tests, scored 7,487 runs at 42.29 and was one half of the most prolific opening batting partnership in Test history alongside Gordon Greenidge. He was capable of some destructive innings and combined impeccable timing with power in his stroke-making and has played four ICC World Cups in that era.

Bob Willis of England played 90 Tests taking 325 wickets at 25.20 and spearheaded the English bowling attack during some of their most memorable moments during this period. Standing two metres tall, he could make the ball bounce awkwardly on most pitches and possessed an excellent yorker and bouncer, both of which he used to great effect throughout his career. His greatest triumph was the famous eight for 43 that beat Australia at Headingley in 1981 and after retirement became a popular, and often a polarising member of the Sky TV commentary box.

Modern Era Cricket: Players whose greatest contributions to the game were between 1996-2015

Andy Flower of Zimbabwe played 63 Tests, scoring 4,794 runs at 51.54, took 151 catches with nine stumpings as a left-handed wicket-keeper batsman. First Zimbabwe player to be inducted in the ICC Hall of Fame. His grit, determination and will to succeed meant at one point he was ranked number 1 batsman in the world. Andy carried his country’s batting for long periods, setting the record for the highest Test score by a wicketkeeper with an innings of 232 not out against India at Nagpur in 2000. Later, he became a hugely successful coach, leading England to the number 1 spot in the MRF Tyres ICC Test Rankings for Men.

Kumar Sangakkara of Sri Lanka played 134 Tests, scored 12,400 runs at 57.40, took 182 catches and 20 stumpings, and was grace personified at the crease. Sangakkara ended his career as the most prolific run-scorer his country had ever known, with double-hundreds flowing from his bat with consummate ease. In 2014 he struck 319 and 105 in the same Test match against Bangladesh and in 2017 fell just 16 runs short of striking six successive centuries in first-class cricket.

The 10 icons inducted as part of this special edition were voted for by the ICC Hall of Fame Voting Academy, comprising living Hall of Fame members, a FICA representative, prominent cricket journalists and senior ICC figures.