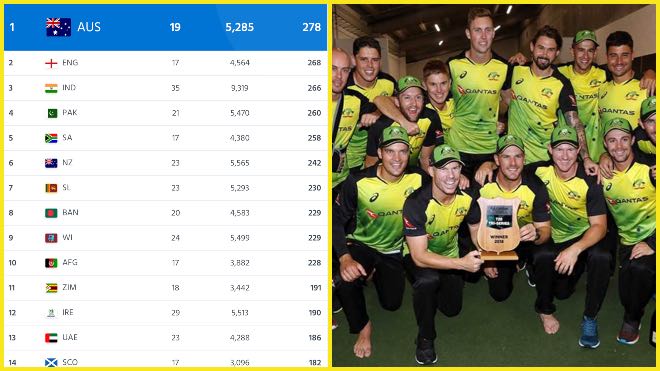 ICC T20I Rankings: Australia at the top for the time in T20I rankings, Pakistan slipped to 4th

Pakistan have moved to the fourth position with 260 points after being at the top of the table for 27 months since January 2018. England are in second place with 268 points and are followed by India in third place with just two points behind (266 points).

Afghanistan are down from seventh to 10th while Bulgaria are the biggest gainers, up 12 places to 51st in the 84-country list of teams that played the requisite six matches in the past three years.

When the global T20I rankings were launched 12 months ago, there were 80 ranked teams. Since then seven teams have joined the table (Bermuda, Cayman Islands, Italy, Norway, Portugal, Romania and Turkey), while three countries (France, Isle of Man and Israel) have lost their rankings having played insufficient matches.

In the ICC Test rankings Australia is the table topper while in the ICC ODI rankings England leads the table.