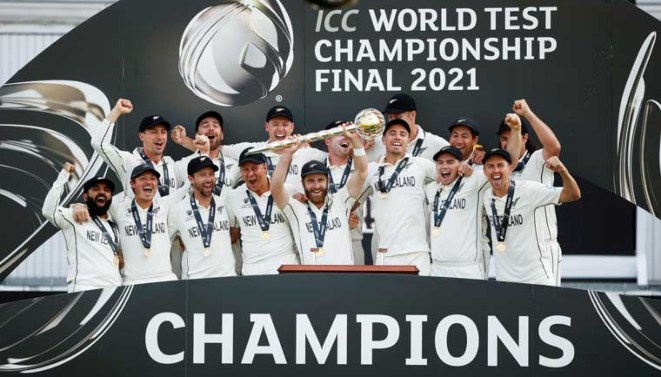 Nice guys don’t always finish last”. This is the line that is now trending all over the cricket circuit and social media as New Zealand becomes the winner of the inaugural World Test Championship. The Blackcaps beat India by 8 wickets in the final played at Southampton on Day 6 as a reserve day.

After tea break, Ravichandran Ashwin spun the web and helped India to get their first wicket. Tom Latham scored 9 runs and went to the pavilion. Ashwin once again proved his magic and this time he got the wicket of Devon Conway and brought India back in the match. Kane Williamson and Ross Taylor then came to the crease.

They looked at the scenario and accordingly reacted to it. Both of them played patiently and attacked those balls where they can find runs and had the match-winning partnership of 95 runs. Williamson scored 52 runs and Ross Taylor scored 47 runs. Taylor hit the winning shot and hence, New Zealand became the Inaugural Champions of ICC World Test Championship.

Kyle Jamieson for his phenomenal performance in the final was adjudged as the ‘Man of the Match’. He took a 5-wicket haul in the first innings and 2 wickets in the second innings. In both innings, he able to dismiss Virat Kohli.

Right from the First session, NZ bowlers performed very well which helped them to bundle out India and stopped their lead on 138 runs. Jamieson got the main wicket of Virat Kohli and Cheteshwar Pujara in the first session.

Rahane and Pant tried to increase the score but in that quest. Rahane got out all due credits to Trent Boult. Boult got 3 wickets. He dismissed Rahane, Pant, and Ashwin. Shami tried to hit some runs to have it under the belt, but Southee had his last laugh in the end. He got 4 wickets.

After the match, Virat Kohli said, “First up, a big congratulations to Kane and his team. They’ve shown great consistency and heart, and pull off a result in three days. They put us under pressure throughout the Test and did extremely well to win. It was difficult to get momentum on Day 2, and we did really well with the ball in the first innings. This morning was the difference where their bowlers executed their plans to perfection and didn’t give us scoring opportunities. We were 30-40 short of giving them a good target.”

He also added, “I don’t regret announcing my XI beforehand, because you need an all-rounder in the side but we made a unanimous decision that these are the best XI we can take into the park. Jamieson is coming up nicely in international cricket – good areas with the ball, and he can bat quite well too. He’s had a great game and he deserves the man of the match award. It’s great for the game (WTC) and the more Test cricket is given importance, the better it will be for international cricket. It’s a great move by ICC. Test cricket is the heartbeat of the game. It’s a long summer ahead and we are really looking forward to the next series (Tests against England)”.

The Winning Captain Kane Williamson said, “ It’s a special feeling. It’s nice to get one under the belt. I’d like to thank Virat and the Indian team. The heart that our team showed was commendable. It’s the first time we have come away with a world title, and the 22 players who played a big part in getting across the line deserve all the appreciation. This will be remembered for a long time. We don’t always have all the stars, and we saw that in this match. We saw so much heart and commitment. We know how strong the Indian side is, in all conditions. It’s a fickle game, in a one-off final. It ebbed and flowed, no one really had the upper hand for six days, and I’m happy we’re on the right side of it. It was certainly tough going in the first innings. The lower order played with more freedom and got us a lead that gave us an edge. Ross is obviously very experienced and calm in these situations and it was great to be with him right there at the end. BJ Watling – I don’t know if he’s retiring any more actually (jokes). He’s a scrappy player, so this is a fitting end to a fantastic career for BJ Watling.

This is New Zealand’s First major ICC world title in their history of Cricket.