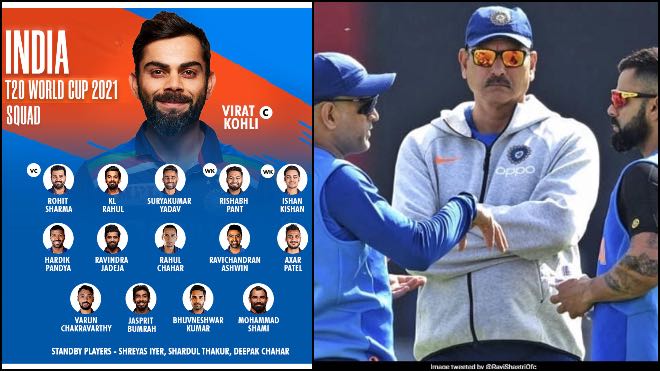 The Board of Control for Cricket in India (BCCI) on Wednesday (September 8) announced the 15-member squad for the upcoming ICC T20 World Cup 2021 in UAE.

Former India captain MS Dhoni will be with the mentor for the T20 World Cup, BCCI secretary Jay Shah said while announcing the squad.

Jay Shah revealed the thinking behind appointing Dhoni, the former India captain who led the side to the inaugural T20 World Cup trophy.

“As far as Dhoni is concerned, I spoke to him when I was in Dubai. He was okay with the decision, and he agreed to be a mentor for team India, for the T20 World Cup only,” Jay Shah said.

“I spoke to the captain (Virat Kohli) and vice-captain (Rohit Sharma) as well as Ravi Shastri (the head coach), and that’s why we reached the conclusion,” he added.

The 34-year-old Ashwin last played T20I for India in July 2017 against West Indies, before being sidelined from one-day cricket following the Champions Trophy.

Suryakumar Yadav and Ishan Kishan, who made their T20I debuts during the home series against England.

India begin the T20 World Cup campaign against Pakistan on October 24 in Dubai. Apart from Pakistan, India have been pooled with Afghanistan and New Zealand in Group 2, as well as two sides who progress from Round 1 of the tournament, beginning on 17 October.

India will face New Zealand in Dubai on October 31 while they will take on Afghanistan in Abu Dhabi on November 3. India will play a total of five matches in the group stage, with their remaining games on November 5 and November 8 against two of the four teams that emerge from the qualifiers.

The top two teams in each group of the Super12 stage progress to the semi-finals, with the final set to be played in Dubai on 14 November.