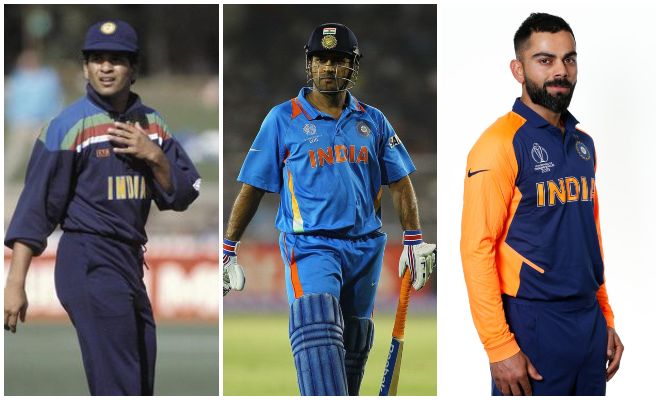 Coloured Jersey was introduced in Cricket in the 1980s but the 1992 World Cup that was the first edition to feature the coloured jersey.  First 4 Cricket World Cups were played in the traditional whites which continues in Test cricket till now.

In 2019 Cricket World Cup, match against England on 30 June 2019, orange will be the new blue for Indian cricketers. This is because of ICC new rules which ask the team to have two jerseys: home and away jerseys.

The Indian ODI jersey has gone through quite an evolution. It started off in the mid-1980s by being light blue with a yellow stripe, without ‘India’ written anywhere.

In 1996 World Cup India wore the light blue jersey with a yellow collar and the yellow patch India written on the centre of the jersey and a rainbow colour arrow around the jersey.

In 1999 World Cup India continued its light blue as a primary jersey colour with a portion of BCCI logo and without the country name.

India changed the 2003 World Cup Jersey. Light blue became a little dark with a black strip along the arms and a tri-colour with the team name written on it at the front.

In 2007 India wore the light blue jersey with Tri-colour on the right side, ‘India’ written on the chest with yellowish-orange with white border and team sponsor ‘Sahara’ on the left arm.

This World Cup India changed the jersey; changed from light blue to a darker shade of blue with Tri-colour along the arm, ‘India’ written on the chest with orange with a white border and team sponsor ‘Sahara’ on the right arm.

In 2015 World Cup India word dark blue jersey with ‘India’ written on the chest with orange with a white border. India’s 2015 World Cup jersey was manufactured from recycled plastic bottles.

In 2019, ICC changed their rules; because of ICC new rules which ask the team to have two jerseys; home and away jerseys.

ICC read, “For televised ICC events all participating teams will be required to provide for two different coloured kits, except for the host country who has a preference in the choice of colour and may, if it chooses to do so, provide only one coloured kit to be worn in all matches throughout the event.”

India 2019 World Cup home jersey is in blue colour; darker shade at the front and lighter shade at the back with ‘India’ written on the chest with orange with a white border.

Away Jersey: Orange and Navy Blue

India’s away jersey in the 2019 World Cup will be of the orange colour with navy blue. It has a blue colour on the front and orange on the rest with ‘India’ written on the chest with orange with a white border on blue.