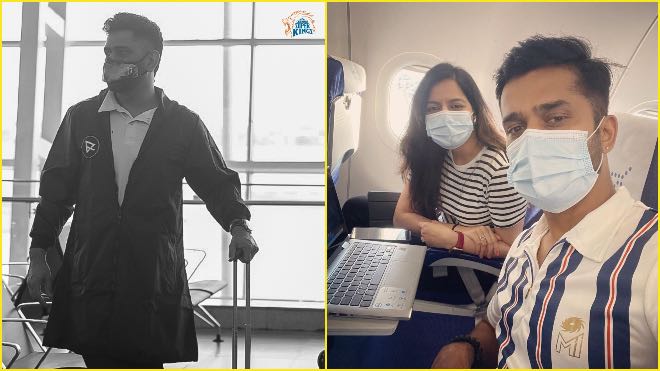 CSK shared a picture of Dhoni in which the former India skipper can be seen with his suitcase as he gears up to leave for UAE. “Get ready folks!” CSK tweeted.

Mumbai Indians shared a picture on Twitter in which Talent Scout Vinay Kumar can be seen travelling on the flight to UAE.

As per sources, the MI domestic players had been training for the last two weeks after undergoing quarantine. The Mumbai Indians unit had been training at their ground in Ghansoli, the Reliance Corporate Park.

Meanwhile, it has come to the fore that only Mumbai Indians and Kolkata Knight Riders have decided to re-book the hotels they used during the 2020 edition of the IPL. All the other six franchises will stay at new hotels.

The BCCI SOP had called for teams to preferably book smaller hotel properties so that they could be fully booked for exclusive use by the participants within the Bio-Secure Environments. The SOP further stated that if a larger hotel is chosen, then the participants will be accommodated in a separate wing of the hotel.

No other hotel guests will be allowed in the team zones/floors. Dedicated floors/zones will be allotted to each franchise team, match officials and match management teams to avoid mixing of the various groups within the hotel premises.

The 14th season, which was postponed in May this year in the wake of the COVID-19 pandemic, will resume on September 19 in Dubai with a blockbuster clash between Chennai Super Kings and Mumbai Indians.