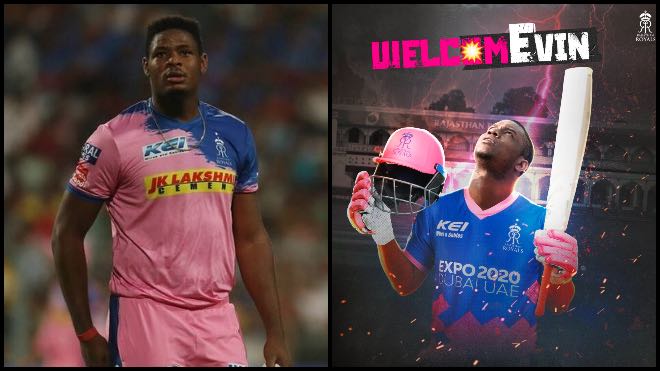 Rajasthan Royals have roped in Oshane Thomas and Evin Lewis as replacements for Ben Stokes and Jos Buttler for the remaining 2021 season of the Indian Premier League (IPL 2021).

England wicketkeeper Jos Buttler pulled out of IPL 2021 as he and his wife are expecting their second child this month. Buttler has also decided to skip the fourth Test against India because of the same reason.

All-rounder Stokes meanwhile, has taken an indefinite break from cricket to look after his mental health. Stokes had made himself unavailable for the five-Test series against India and was replaced by Craig Overton in England’s squad.

Returning for his second stint with the franchise, Oshane Thomas who made his IPL debut in IPL 2019, is currently in action in the CPL, with Barbados Royals. The six-foot six-inch Jamaican giant has picked up 5 wickets in 4 IPL appearances for Rajasthan Royals and was part of the squad at IPL 2020 as well.

Having made his T20I debut against Afghanistan in 2017, Lewis is an explosive left-handed batter and one of the few players to have two or more T20I centuries to his name. He has showcased his power-hitting across several T20 competitions, including the Caribbean Premier League and the Bangladesh Premier League. Lewis’ ability to send the ball miles out of the park, as well as a couple of destructive innings against India in 2016, helped him bag an IPL contract when he was picked up by Mumbai Indians in 2018. He scored his maiden IPL fifty against RCB and has 430 IPL runs in 16 games to his name, at a strike rate of 130+.