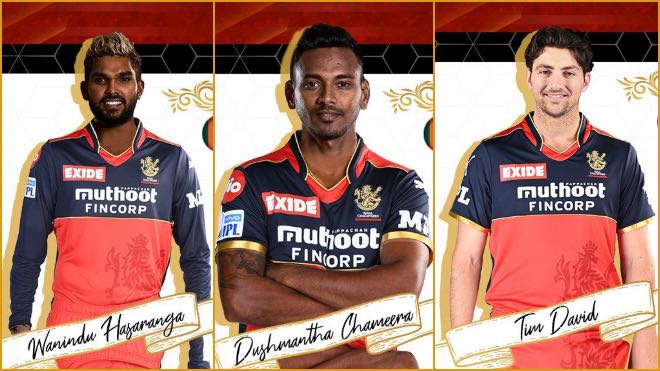 Royal Challengers Bangalore have signed the Sri Lankan pair of Wanindu Hasaranga and Dushmantha Chameera, as well as Australia’s Singapore-born Tim David for the UAE leg of IPL 2021.

The signings have been enforced after New Zealand’s Finn Allen and Scott Kuggeleijn were picked for national team duty for the series against Bangladesh while Adam Zampa, Daniel Sams and Kane Richardson declared themselves unavailable for the second leg of the tournament.

The 24-year-old leg-spin-bowling allrounder, Hasaranga has been making heads turn in recent times, and certainly made an impression, especially with the ball, when India went to Sri Lanka in July for a limited-overs series, with a three-for in the second ODI and seven wickets – including a 4 for 9 – to top the bowling charts in the three T20Is.

Chameera has also been among the wickets in what is the second coming of sorts for him in international cricket, with a bagful of wickets in England in June and then against India at home.

Singapore-born David turned heads during his brief stint with Lahore Qalandars at the PSL. Before that, he scored 279 runs at a strike rate of 153.29 playing for the Hobart Hurricanes in the Big Bash League. Recently, Tim David was signed by Saint Lucia Kings for the CPL 2021.

With the three new additions, RCB have seven overseas players on their roster and one more slot to fill, which they are expected to do in the coming days.

Talking about the changes in the team, Mike Hesson – Director of Cricket Operations and newly appointed head coach for IPL 2021 said, “We have made some changes to the squad pertaining to the situation. We have come a long way and have shown steady progress as a team. The addition of Wanindu Hasaranga, Tim David and Dushmantha Chameera couldn’t have come at a better time in the replacement window, as we aim to continue with the momentum, building on our performance from earlier this year.”