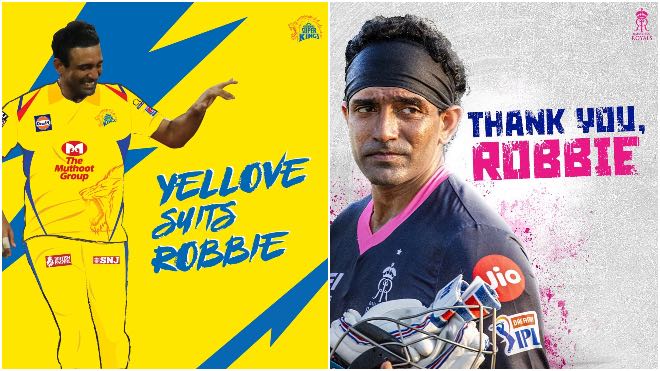 Announcing the departure of the Robin Uthappa, Rajan than Royals tweeted, “Thank you for your time in pink, Robbie. Sending good wishes (and whistles) your way.”

Thank you for your time in pink, Robbie. ?

On the other hand, announcing the arrival Chennai Super Kings tweeted, “Robin is our newest Bat-Man! Welcoming you with #Yellove Vanakkam @robbieuthappa! #WhistlePodu.”

Speaking on the development Rajasthan Royals COO, Jake Lush McCrum said, “We’d like to thank Robbie for his contribution during his time with us. He provided significant value building into the season in our camps in Guwahati and Nagpur, and his speech during our World Cup winners session during the season was one of the most powerful we have heard.”

“We do have depth with regards to openers in our squad, therefore when the offer came from CSK, we thought it was a good opportunity for all parties involved. We’d like to wish Robbie all the best for this season at CSK and his future beyond that,” he added.

“I really enjoyed my year at the Royals and had a great time being part of this franchise. I am now excited for the next part of my cricketing journey joining CSK for IPL 2021,” Robin Uthappa was quoted as saying in a Rajasthan Royals press release.

The 35-year-old has previously played for Mumbai Indians, Royal Challengers Bangalore, Pune Warriors and Kolkata Knight Riders. Robin Uthappa was bought by Rajasthan Royals for Rs 3 crore in the IPL 2020 auction. In IPL 2020 Robin Uthappa scored 197 runs in 12 matches at an average of 16.33.

Overall Robin Uthappa had played 189 matches and scored 4607 runs at an average of 27.92 and strike rate of 129.99. In 2014, Robin Uthappa was the orange cap holder for scoring 660 runs playing for Kolkata Knight Riders.