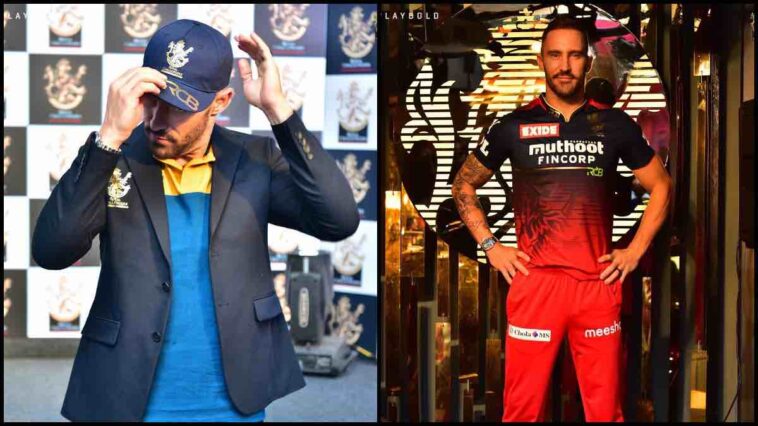 Former South Africa skipper, Faf du Plessis has been announced as the Royal Challengers Bangalore (RCB) for the upcoming season of the Indian Premier League (IPL 2022), the franchise announced on Saturday (March 12).

Faf due Plessis takes over from Virat Kohli, who stepped down from the position at the end of the last season (IPL 2021). Faf du Plessis was acquired by RCB for Rs 7 crore in the IPL 2022 Mega Auction in Bengaluru.

Announcing Faf du Plessis as captain, Virat Kohli said, “First and foremost the most important news is that Faf is going to be the captain of RCB and I couldn’t be happier to pass on the baton to a good friend someone that I have known well over the years.”

“We have been in touch for many years now and he is one of the few guys that I have gotten to know little bit from cricket and we get along very well. So absolutely excited for him to lead RCB and play under him, the partnership with Faf is going to be an exciting one for the RCB fans along with Maxie as well as the group we have retained,” he added.

“And also the squad that we put together, I think is pretty amazing. I can’t wait to get started and catch up with Faf and the rest of the boys,” he said.

Speaking about the new captain, Mike Hesson, Director of Cricket Operations, RCB said, “I would like to extend my best wishes to Faf du Plessis on being appointed as RCB captain. Faf is not only a world-class player, he has also shown tremendous ability to lead on the international stage in all three formats of the game. His contribution on the field is eminent but a leader who leads by example is very inspiring to any team. His experience and inclusive style of leadership will certainly be crucial in maximizing the knowledge from all of the leaders within our RCB squad. Captaincy is not only about tactics it’s also about getting to know individuals and helping them achieve special things, we are confident that together with this group we can build on the success of this team in the season ahead.”

Expressing his delight on being appointed as RCB captain, Faf du Plessis said, “The opportunity to be the captain of a franchise like RCB is massive and a role I was glad to accept. The work is just going to begin as we try to build off the success the team has enjoyed in previous years. I would like to thank RCB management and the coaching team for entrusting me with the role and I will do my best to ensure a successful season this time with the desired outcome.”

In IPL 2021, Faf du Plessis was the second-highest run-scorer last season with 633 runs from 16 matches i.e. just two runs short of his teammate and the Orange Cap winner Ruturaj Gaikwad who finished with 635 runs to his tally.

Royal Challengers Bangalore will play their first match in the IPL 2022 on March 27 against Punjab Kings at DY Patil Stadium, Mumbai.