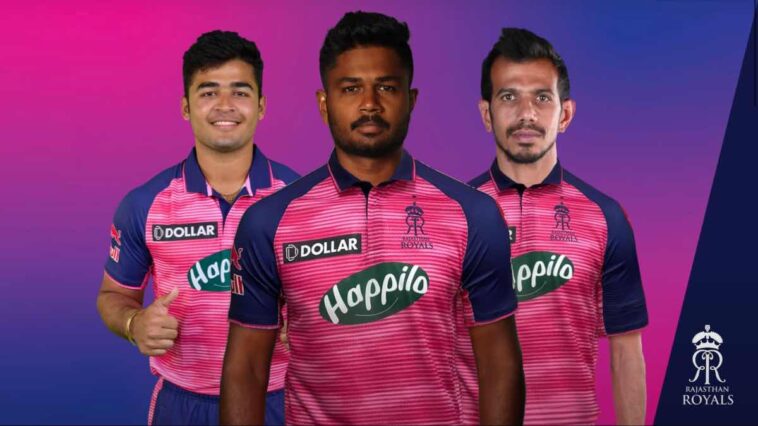 The 2022 Royals jersey is inspired by a unique Rajasthani design called the ‘Leheriya’, meaning ‘wave’ in English. To honour, and hopefully revive, the industry, the Rajasthan Royals decided to feature this design on the jersey, which is a trademark of the state’s textile industry.

While a vibrant pink remains the dominant colour, it is contrasted with a sturdy blue on the sleeves. The two colours on the kit are significant for Rajasthan Royals and are part of what the franchise stands for. Pink – which makes up the front and the piping on the collar and sleeves – represents the strong women of the state, and the admiral blue – on the main collar and sleeves – stands for poise.

The Australian daredevil, FMX legend Robbie Maddison was given the task of delivering the latest Rajasthan Royals’ jersey at their home ground, the Sawai Mansingh Stadium. With the package secured in his backpack, Robbie zipped past some of the most iconic locations in the city, like the Amer Fort, Patrika Gate and Jal Mahal Lake.

After weaving past obstacles and traffic at breakneck speed, Robbie was stopped at the Stadium gates by security guards. But he managed to dodge security and flew his FMX bike over barriers making his way to the cricket field the only way he knew how – from the roof! The Red Bull athlete rode up the five-storey administration building at the Sawai Mansingh Stadium, took a deep breath and performed what he described as “a world-first” – he launched his bike off the building and onto the cricket field, where he successfully delivered the package to the Rajasthan Royals players.

Once Robbie had handed them the package, the players quickly tried on the new threads for the first time.

“The new jersey looks very cool. We have added a different element to it, and I’m proud that as a franchise, we’re able to promote our home state’s renowned textile patterns,” Samson said of the jersey.

“It was really amazing. Robbie’s amazing stunts were something that I’ve seen for the very first time in person, having only watched previously on TV. (Would I ever try this sport?) Maybe I’ll try it out for myself also once I’ve stopped playing cricket (laughs),” said Royals’ captain Sanju Samson, who signed in for the special delivery.

“I’m very impressed with the whole concept behind the reveal, seeing the stunts from the big man, I was just astonished to see how he’s able to do these so fearlessly. Who does things like these?” he asked incredulously.

Meanwhile, Jake Lush McCrum, Chief Executive Officer, Rajasthan Royals, reacted, “We are delighted to present the new official jersey of the Royals for the 2022 season. The jersey is inspired by traditional Rajasthani Leheriya patterns, given a contemporary twist. We wanted to create a jersey that our fans will wear year-round and I’m confident we’ve achieved that with this design. With regards to the jersey launch, each year we work with our long-term partner, Red Bull, to come up with a really special and memorable event. I think the team has taken it to another level for 2022! I doubt there has ever been a reveal like this in the history of sport and I hope it excites sports fans around the world, while giving them an insight into the beautiful state of Rajasthan.”

“This film is a creative piece, and we had a challenging environment to do it in, but we managed to get it done. Every piece was challenging. A lot of people around. And a lot of people who were inquisitive. No one was there of course to cause any harm, but just having so many people around it made it challenging. The big highlight for me was coming off the roof of the Rajasthan Royals administration building,” Robbie said.

“Jumping off the five-storey building at the arena was definitely challenging. It’s never really been done before on a motorcycle, so it’s kind of like a world first,” he added.

The Royals x Red Bull association has given the fans some excitingly unique jersey reveals in the past few years. In 2020, the Spanish Skydiving and Red Bull Wingsuit Athlete Dani Roman jumped out of a plane, several thousand feet above the Palm Islands in Dubai, flew over the awe-struck Rajasthan Royals players as he left a strew of smoke through the air, parachuted onto the beach and dropped off a bag full of Rajasthan Royals 2020 jerseys for the players to grab.

In 2021, Rajasthan Royals got together with Red Bull India to put on a splendid spectacular 3D projection and light show at the Sawai Mansingh Stadium finding a novel way to reveal their jersey for that season.

The newly kitted Rajasthan Royals will begin their 2022 campaign on March 29 against Sunrisers Hyderabad at MCA Stadium, Pune.