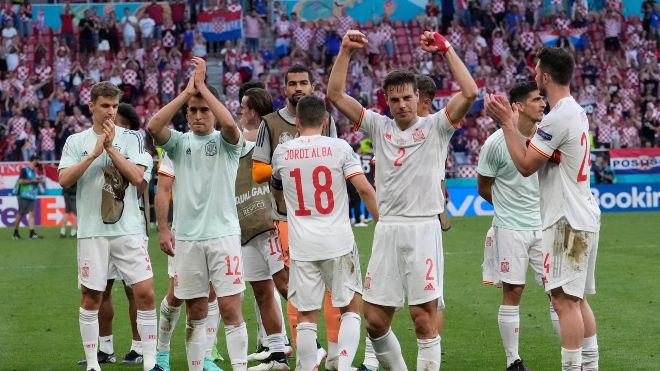 Spain managed to overcome the Croatia hurdle on Monday night after recording a 5-3 win in the European Championship. The Spaniards were extended into extra time by Croatia after they lost a healthy two-goal advantage in regular playing time.

Croatia got the lead after a horror mistake by goalkeeper Unai Simon early on in the game. Youngster Pedri played a back pass and Simon tried to receive it but the ball slid under his feet straight into the net.

Manager Luis Enrique has hailed Unai Simon’s mental strength. He says the goalkeeper showed great mentality to continue in the match after that moment of madness. In all honesty, Unai Simon did make a fair amount of saves after that mistake.

“[Unai Simon] has taught everyone a lesson. After a mistake, your mistake does not matter, but your attitude after the mistake. It is a lesson for all his teammates and for all the children who want to play football,” Enrique said.

Spain fell to late goals from Mislav Orsic and Mario Pasalic in the final moments as Croatia came roaring back. However, Alvaro Morata silenced his haters by firing in a bullet shot to give Spain the lead again. This will be extremely crucial for his self-confidence.

Mikel Orzyabal put the final nail in the coffin for Croatia as he scored Spain’s fifth goal of the night. Speaking on the game, Luis Enrique says it was a crazy match.

“It was an epic match. It had positive and some negative things. Football is a sport of mistakes. The two sets of fans have applauded the two teams for the effort and show that the two teams have given. I have lived through some very intense matches, but this is one of the most,” he said.