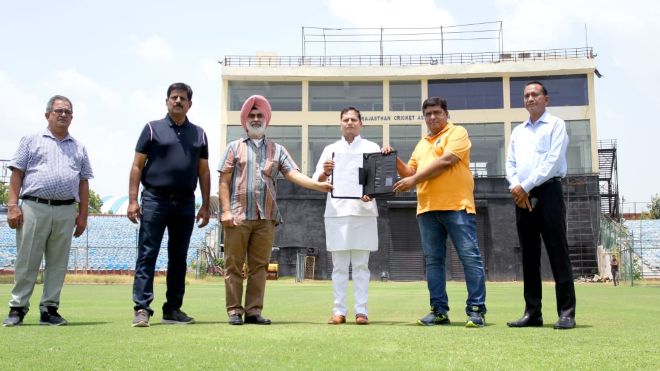 The Rajasthan Cricket Association (RCA) has now decided to build the world’s third-largest cricket stadium in Jaipur. The capacity of the stadium will be 75,000 people and the estimated cost for the construction will be Rs 300 crore.

The stadium will be located at the Chomp village on the Jaipur-Delhi highway which will be completed by RCA in about two and a half years.

RCA president Vaibhav Gehlot said, “It will be the third-largest stadium in the world. In which 75,000 spectators will be able to enjoy the match. The stadium will be constructed in two phases – In phase-1, 40,000 spectators capacity will be built with 11 cricket pitches, two practice grounds, one cricket academy, a hostel, parking facility, sports club, hotel, and gym.”

The new stadium will be the third-largest stadium after Narendra Modi stadium in Ahmedabad (132,000) and Melbourne Cricket Ground (100,024).

An RCA official said that it will get an infrastructure grant of Rs 100 crore for the project from BCCI and Rs 100 crore will be raised from bank loans.

The Jaipur Development Authority has handed over the land lease deed to the cricket body for the stadium. The RCA will soon issue the tenders for the constructions. The construction will likely start in September.

Currently, Jaipur is having Sawai Mansingh Stadium as the international Cricket arena which have a capacity of 30,000 people.