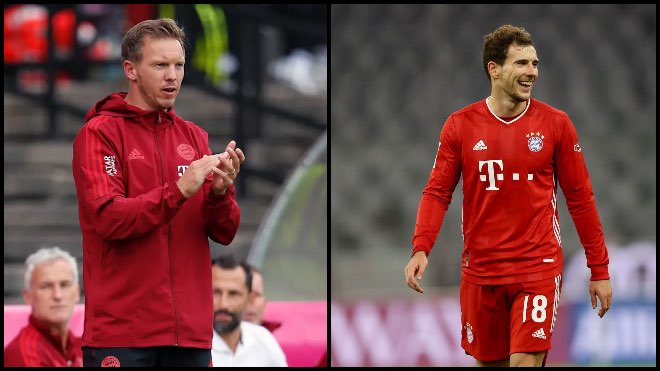 Leon Goretzka has entered into the final year of his contract with Bayern Munich. The Bavarian club is afraid that they might lose the German midfielder for free next season and hence want to cash in on him this transfer window itself.

Premier League club Manchester United are interested in signing the midfielder. The club has already signed up Jadon Sancho and Raphael Varane and wants Goretzka as their third signing.

However, Bayern Munich manager Julian Nagelsmann remains confident that Leon Goretzka will sign a new contract with them. He is ‘confident’ that Goretzka will stay at Allianz Arena.

“I’m not involved enough that I have a say every day. I stay out of these issues,” said Nagelsmann when questioned about Leon Goretzka’s contract situation.

“Of course I have talked to him about my plans for him. I’ve told him I’d be happy if he extended and I’m also confident. There are several topics involved when it comes to discussing a contract extension,” he added.

“I’lI ontinue to focus on the sports side of things and show him he can be one of the most dangerous midfielders in Europe. He has potential to get even bett,.” he said.