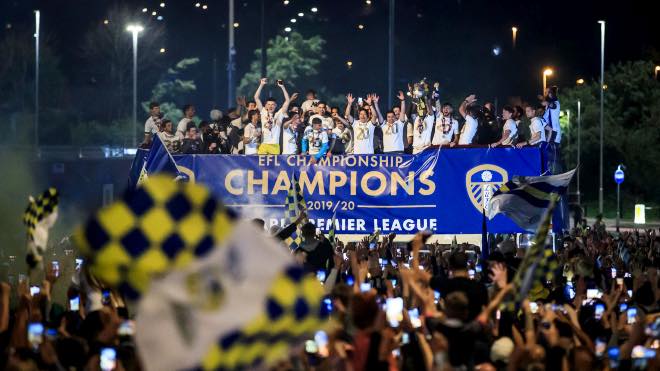 It took Leeds United 16 years to get back to the top tier. On July 19,2020 Leeds United sealed their English Premier League spot by defeating Derby County 1-3 at the Pride Park Stadium. Overwhelmed with their achievement the Peacocks celebrated their Championship triumph by setting off coloured smoke pyrotechnics.

As per the guidelines issued by England FA, the club was found guilty of breaching Rule E20. The club has been fined a fee of 20,000 pounds ($25,992) by the Football Association and also have issued a warning of future use of pyrotechnic devices during celebrations.

“Leeds United FC has been fined £20,000 and warned as to its future conduct after admitting a breach of FA Rule E20,” the FA spokesman Twitter account posted this afternoon.

[1/3] Leeds United FC has been fined £20,000 and warned as to its future conduct after admitting a breach of FA Rule E20. pic.twitter.com/E5ssJ0s2yC

“The club failed to ensure that its players and/or officials conducted themselves in an orderly fashion as pyrotechnic devices were used following the completion of a fixture against Derby County FC in the EFL Championship on 19 July 2020,” FA Spokesperson further added.

[3/3] The independent Regulatory Commission’s written reasons for the sanction can be accessed here: https://t.co/zwbnBmc6qg

In August, Leeds were initially fined 30,000 pounds but since there was an immediate apology from the Club Management and no individual was threatened or endangered by the action and no one was injured, the fine was revised to 20,000.