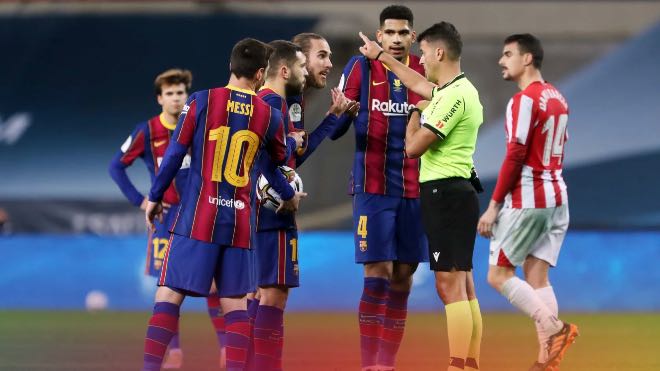 Barcelona A-list player Lionel Messi has been suspended due to the physical assault during the Spanish Super Cup Final against Athletic Club. Messi swung his arm at Asier Villalibre (Bilbao) during the end of the match. “FC Barcelona is to appeal the suspension issued to Leo Messi,” FC Barcelona said in a statement.

Subsequently, he was supposed to be suspended from the upcoming 12 matches, although, it was not regarded as a severe incident by the concerned management. Moreover, this has not been the first incident when Messi lost his temper on the opponent team members for instance in 2005 and 2019 for his aggressive behaviour against Hungary and Chile.

Moreover, Referee Gil Manzano in his report for the match stated that Messi deliberately used “excessive force” to hit the opponent. Fans might be disappointed as it is speculated that the player will be absent in the match against club Cornellà in the Copa del Rey and Elche in the Spanish league.

Messi, who asked to leave the club in the offseason but had his request denied, is having an average season compared to previous years, having scored 14 goals in 22 matches. He was far from his best on Sunday despite helping set up the team’s first goal. Messi had been doubtful to play in the Spanish Super Cup final because of an unspecified fitness issue that had caused Koeman to leave him out of the semifinal match against Real Sociedad on Wednesday when Barcelona prevailed in a penalty shootout.

Although Messi had earlier requested to depart from the club during the offseason, the management still decided to retain him. His performance has already been ranked below average by the sports fanatics in comparison to his earlier record that has started concerning people about his fitness.