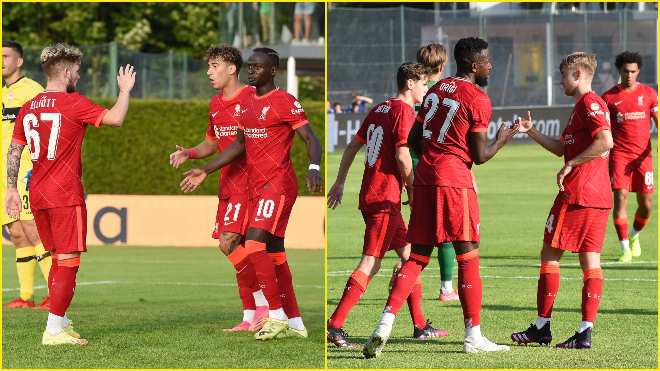 Liverpool’s pre-season training at Austria is under full flow as the Reds are ramping up their preparations ahead of the start of the Premier League in August. The Premier League will be resuming from August 14th.

The Reds drew 1-1 with Wacker Innsbruck and VfB Stuttgart in Austria. A host of young players and academy graduates took part in the games and were impressive. Trent Alexander Arnold is leading the young squad.

“During Wednesday morning’s session, the volley of Kostas smashing it in with his left foot probably won the most spectacular goal award,” Lijnders said.

“Sadio also scored one with his left foot from an impossible angle, so not sure who I would give the most spectacular goal award to,” he added.

“The young team won the finishing tournament; Trent was using his shooting skills to lead them to victory. I told him after the games on Tuesday that in the U16s he scored so many from a big, big distance,” he said.

Young goalkeeper Caoimhin Kelleher was also in full flow for the Reds. Ljinders says Kelleher played so well and saved so many goals in training that some senior players started abusing him.

“But, to be honest, the player of the tournament was Kelleher,” he said.

“His shot-stopping and speed reactions were just insane. It shows that a goalkeeper can win you tournaments. There was some swearing from the older players towards him!,” he added.