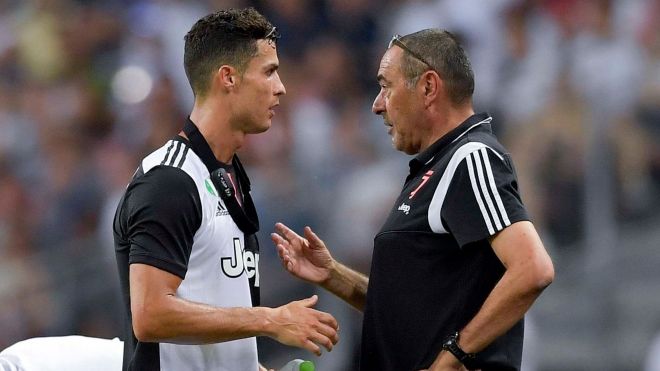 Managing Ronaldo is not easy: Maurizio Sarri opens up on troublesome time at Juventus

Italian manager Maurizio Sarri has recently talked about his time at Chelsea FC and Juventus and how they both were different from each other. Sarri has said that leaving Chelsea was a big mistake on his behalf.

However, just after one season, Sarri decided to part ways with Chelsea and go back to his nation and manage Italian giants Juventus. But even after winning the league title with the Old Lady, he was not spared the sack.

He has talked about the challenges in managing a global superstar like Cristiano Ronaldo.

“Managing Ronaldo is not simple, from all points of view,” he said.

“He’s a multinational company, he has personal interests that must coincide with football. His interests go beyond normalcy, beyond the team or club. I’m a coach, not a manager. Ronaldo, however, brings the numbers at the end of the year. But in recent years, I hear a lot about players and little about teams,” added Sarri.

Speaking about his time at Chelsea, Maurizio Sarri said that returning to Italy was a mistake. He says that the kind of players Chelsea have currently would’ve suited his style of play.

“Marina Granovskaia wanted to keep me from leaving Chelsea. Today I say that it was a mistake to want to return to Italy at all costs. Chelsea are a great club, in the following years they have taken many young players [who would have been] suitable for me,” he said.