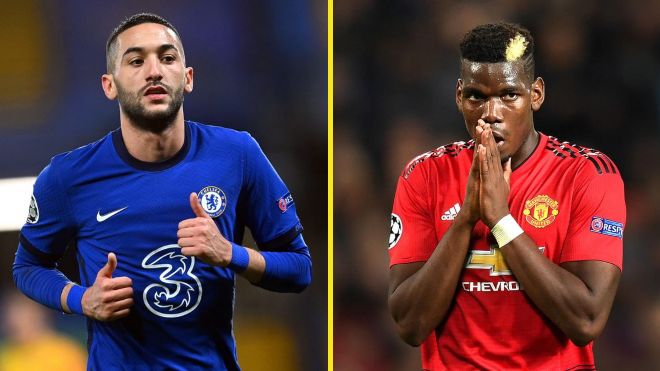 Manchester United midfielder Paul Pogba continues to be linked with French club Paris Saint-Germain. PSG are very confident that they can get Paul Pogba to Paris and are willing to dish out the money required. Ole Gunnar Solskjær has refused to talk about Paul Pogba’s transfer rumours.

Recently when asked about Paul Pogba’s future, Ole Gunnar Solskjær simply said talks are going on with his representatives. Now suddenly news is coming out that Mino Raiola, Paul Pogba’s agent has offered him Liverpool.

The French international is in his last year of contract with Manchester United. According to Le10Sport, Mino Raiola has offered Paul Pogba to arch-rivals Liverpool FC.

Italian club AC Milan are interested in Chelsea forward Hakim Ziyech. With several top-notch players in the squad, it is becoming difficult for Ziyech to solidify his place. Hence AC Milan remains confident that they can persuade Ziyech to join them.

Paolo Maldini has identified Hakim Ziyech as a key player as he can play both as a winger and an attacking midfielder. Moreover, AC Milan have already done business with Chelsea over the transfer of defender Fikayo Tomori.

According to a journalist from La Gazzetta dello Sport, AC Milan are still pushing for Hakim Ziyech. There are also reports that AC Milan will be more than happy with a loan move as well if a permanent transfer is not finalised before the transfer window closes.