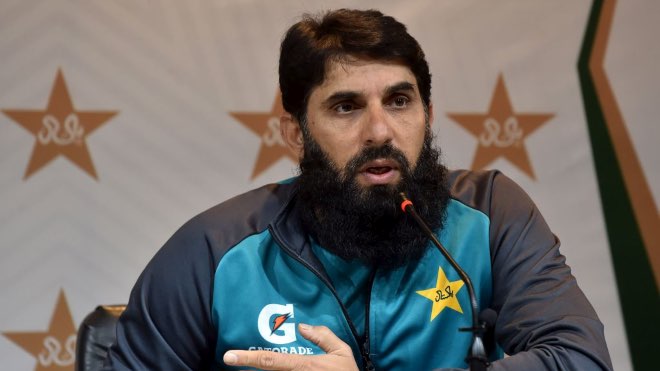 Misbah steps down as Pakistan chief selector, to focus on coaching

Misbah-ul-Haq has stepped down from the chief selector’s responsibilities to concentrate and focus on the head coach’s role of the Pakistan men’s national team. Misbah communicated his decision to PCB Chief Executive Wasim Khan in Islamabad last week during the National T20 Cup.

Misbah-ul-Haq took over the charge of both selecting and coaching the team in September last year. He was appointed coach with a three-year tenure, a few months after the team, under Mickey Arthur, missed out on a semi-final spot in the ICC Men’s Cricket World Cup.

Pakistan have had mixed results under Misbah’s coaching tenure so far, winning seven of their 19 matches since he took over and losing nine. Perhaps the most surprising result was the 3-0 loss at home to Sri Lanka in T20Is soon after he took over. They have shown encouraging signs more recently, drawing their away T20I series against a dominant England side 1-1. They lost a Test on that tour by a slim margin and drew the other two games.

The first assignment of the new chief selector will be to select the squads for the January home series against South Africa, comprising two Tests and three Twenty20 Internationals.

Commenting on his decision, Misbah-ul-Haq said, “I have thoroughly enjoyed the dual roles but after reviewing the past 12 months and looking ahead at the workload in the next 24 months of my tenure, it is appropriate that I invest and dedicate all my time, energy and attention to one role from now on.”

PCB chief executive Wasim Khan said, “The PCB wholeheartedly respects Misbah’s decision on stepping away from the chief selector role. When he took on the national head coach role, we also required him to take on the chief selector’s role due to circumstances at that point in time.”

“With a new chief selector, we will revisit the selection criteria to ensure that there is complete alignment between the Selection Committee, the High-Performance Centre and the national men’s cricket team. With so much red and white-ball cricket ahead, we will need to select squads that have a strong balance between youth and experience,” he added.