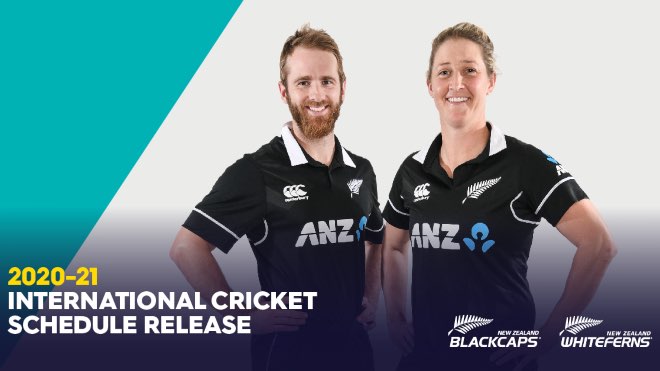 New Zealand will start home international cricket from November 27 with the T20 match against West Indies at Eden Park. New Zealand summer cricket will see the arrival of the West Indies and Pakistan men’s sides in November, followed by the Australia men’s’ team in February, and the Bangladesh men’s side in March.

While the New Zealand Government has so far approved for the West Indies and Pakistan series, New Zealand Cricket chief executive David White was confident the other inbound tours would receive the green light.

Included in the season of international cricket are four Tests, two against the West Indies and then two against Pakistan, the first of which will be a Boxing Day Test at Tauranga’s Bay Oval.

The first Test against Pakistan at Bay Oval will be the eighth Boxing Day Test in New Zealand and the first since the BLACKCAPS beat Sri Lanka at Hagley Oval in 2018. Wellington (five Tests) and Christchurch have hosted the others.

The New Zealand Women’s cricket can also look forward to an exciting summer of international cricket, with the England women’s side confirmed to visit in February and March, and discussions ongoing regarding a visit from the Australia women.

With no international cricket in New Zealand for the bulk of January and February, players will be released to appear in the “Super Smash” domestic T20 competition. Super Shamshad is scheduled to take place from December 24 to February 1.

At the announcement, New Zealand Cricket chief executive David White said, “I’m thrilled to be making this announcement today, given the uncertainty and difficulties over the past six or seven months.”

“We owe a huge debt of gratitude to the New Zealand government for helping us navigate this complex process, as we do to our commercial partners and especially Spark Sport and TVNZ, for their patience and understanding,” he added.

“We’ve worked very closely with Cricket Australia in what is, really, a unique set of circumstances – and we can’t speak highly enough of their commitment to the global game. The same goes for the West Indies, Pakistan, Bangladesh and England – right across the board in cricket there’s been a real spirit of cooperation,” he said.

Head of Spark Sport, Jeff Latch said, “We are incredibly excited to be in a position to let our customers know of the packed summer of cricket schedule on Spark Sport with selected matches on TVNZ.”

“It has been a really collaborative approach to get to the position of announcing the fixtures and I believe in the lead-up to summer, New Zealand Cricket and Spark Sport are well-positioned to pull off a fairly impressive line-up in a year that has thrown us many curveballs, he added.

“Today should also be a timely reminder that the cricket will be coming to New Zealanders differently this year with Spark Sport streaming all matches. Fans who want to get amongst the action should start getting their streaming set-up sorted and be match fit by the time November 27 rolls around,” he said.

TVNZ Director of Content, Cate Slater said, “It has been decades since cricket of this calibre was free-to-air on television in New Zealand and we know that New Zealanders will love this addition to our summer schedule.”